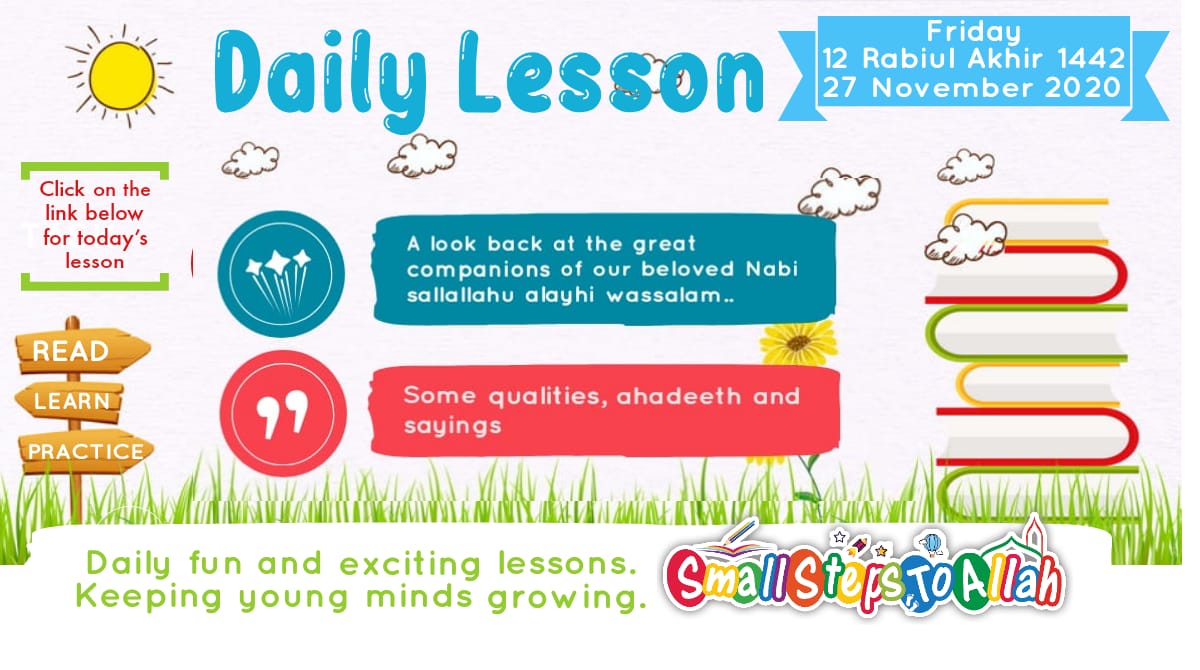 ● She was known for her strong will, piety and thirst for knowledge.

● After the death of her first husband, Sayyiduna Khunays ibn Huzaafah Sahmi رضي الله عنه, who passed away due to injuries he sustained in the battled of Badr, our beloved Nabi ﷺ married her. It is through this blessed marriage, she attained the glorious title of: ‘Ummul mumineen’ (The Mother of the Believers).

● She was very pious and would regularly fast, and offer salaah. For this reason, she was referred to by Jibra’eel عليه السلام as Sawwamah Qawwamah (One who fasts and performs salah abundantly).

● Sayyidah Hafsa رضي الله عنها had the opportunity of living with our beloved Nabi ﷺ for eight years. After his demise, she continued to live in Madeenah for the remaining 34 years of her life and passed away aged 63 years.  She was buried in Jannatul Baqi.

1) Sayyidah Hafsa رضي الله عنها was true to her name and like her father was very determined and had a very strong will. (Note: Hafsa means lioness)

2) She was very reliable and trustworthy which is why she was entrusted with the Glorious Qur’an.

3) She had a great interest to learn deen and would not hesitate in respectfully asking our beloved Nabi ﷺ questions.

4) She was among the few fortunate people to have been educated. Especially among the women of that time this was very rare.

5) She was very regular with salah and fasting, hence Jibra’eel عليه السلام referred to her as sawwaamah and qawwaamah (the one who abundantly fasts and performs salaah)

2) Jibra’eel عليه السلام came to our beloved Nabi ﷺ and said regarding her that, ‘….she fasts often and performs salah abundantly, and she will be your wife in Jannat.’ (Mustadrak Hakim)

4) She narrated 60 ahadeeth from our beloved Nabi ﷺ.

5) She was a Hafizah of the Glorious Qur’an as she memorised it verse by verse as it was revealed.

Following the death of Sayyiduna Khunays Ibn Hudhafa as Sahmi رضي الله عنه, shortly after the battle of Badr, Sayyidah Hafsa رضي الله عنها became a widow.  Her father ‘Umar رضي الله عنه was worried for her and wanted to find her someone who would marry and look after her.

He first visited Uthman ibn Affan رضي الله عنه and offered his daughter for marriage. Sayyiduna Uthman رضي الله عنه after thinking over this proposal for a few days said, ‘I feel that I should not marry at this time.’

Some days later our beloved Nabi ﷺ proposed to her and married her.

This hadeeth shows the exemplary character/akhlaaq of the sahaba and many lessons can be learnt from it.

(Based on a hadeeth found in Bukhari),

(1) Fasting on the day of Aashuraa,

(3) Fasting three days of every month,

(4) Performing two rakaats Sunnah before the fardh of Fajr.

Visit Our section on the Great Companions