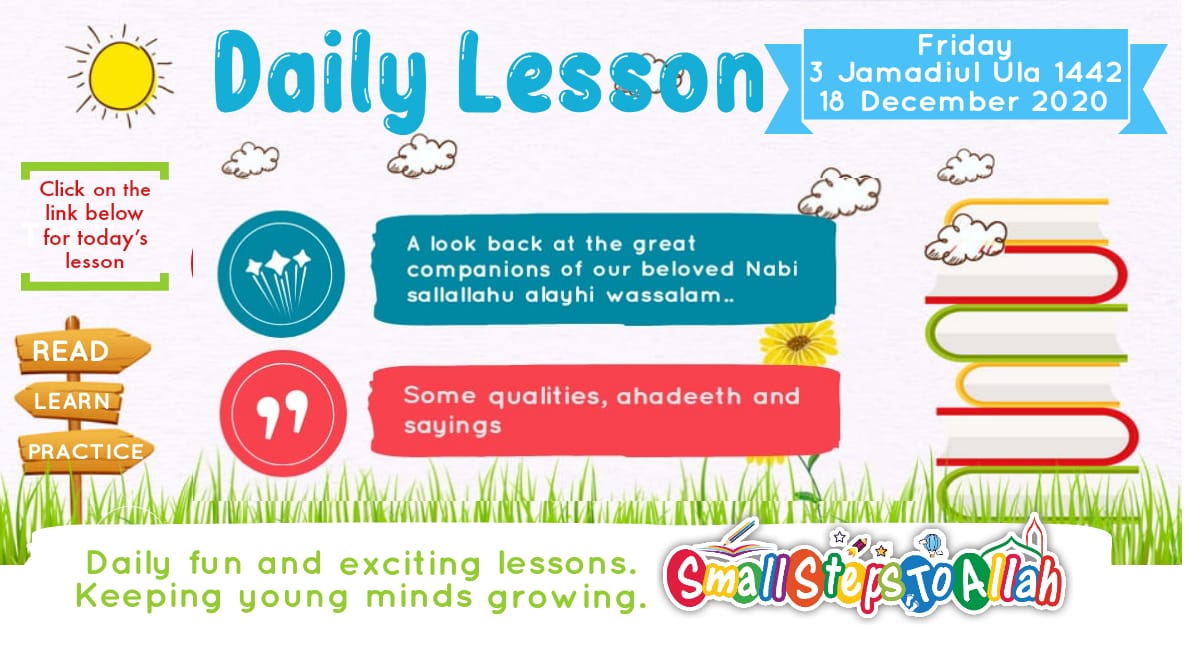 2) He was very careful in narrating hadeeth. He would only narrate what he was fully sure of.

3) He was attached to worshipping Allah Ta’ala, standing in night prayer and reciting the Glorious Qur’an.

4) He was very generous and within whatever means he had he would spend on the poor and needy.

5) Despite his knowledge, closeness to our beloved Nabi ﷺ and being the son of the great Umar ibn Khattab رضي الله عنه , he was very level headed. He was always humble and adopted the highest levels of Humility.

1) On one occasion he narrated a dream to his sister Hafsah رضي الله عنها who mentioned it to our beloved Nabi ﷺ. Upon hearing the dream, our beloved Nabi ﷺ said, “Abdullah is the best of men, how good would it be if he also offered the night prayer.

After this day, it is reported that Sayyiduna Abdullah slept very little at night and he would be engaged in salah all night. As the night would draw to the end, he would repent till morning.

2) On another occasion, he saw a dream that he was holding a silk cloth with which he was able to fly to whichever part of paradise he wished. Our beloved Nabi ﷺ interpreted this dream by saying, “Abdullah is a pious man”. (Tirmidhi)

3) Aisha رضي الله عنها (may Allah be pleased with her) said in observation: No one followed the footsteps of the Prophet more closely than lbn Umar رضي الله عنه did.

5) Explaining his simplicity, Saeed Ibn Jubayr رحمه الله‎‎ reports that he once found him lying on a thick sheet which is used under the saddle of a camel.

Once Sayyiduna Abdullah ibn Umar رضي الله عنه was on the outskirts of Madinah with some companions. Along the way, they stopped to eat and spread the dining mat. A shepherd passed by and greeted them.

The man replied saying, “I regard these days as an opportunity (to gain extra reward). Abdullah Ibn Umar رضي الله عنه was very impressed and wanted to test his level of righteousness.

He said to him, “Sell us a goat. We will pay for it and also give you some of its flesh for your iftar.” The shepherd said the goats belonged to his master and not him. So it was not possible to sell any goats to him.

Abdullah Ibn Umar رضي الله عنه said, “The owner will not know.” The man was shocked by this comment and question, “فاين الله, فاين الله” (Where is Allah?)

When Abdullah Ibn Umar رضي الله عنه returned to Madinah, he bought the slave and the goats from the man’s master freed him and presented all the goats to him as a gift. (Usd Al Ghabah)

On his deathbed he recited the Qur’an continuously. Al-Jariri relates that he told him: “O Abu al-Qasim! Put yourself at ease.”

Shaykh Junayd رحمه الله replied: “O Abu Muhammad! Do you know anyone more in need of the Qur’an at this time, when my record (of actions) is being folded up?”

After saying this Shaykh Junayd رحمه الله continued reciting till he completed one khatam.

He then started from the beginning and had recited seventy verses of Sura al-Baqara, when he left this world.

Ibn Imad al-Hanbali says: “If we were to speak of his merits we could fill volumes.”