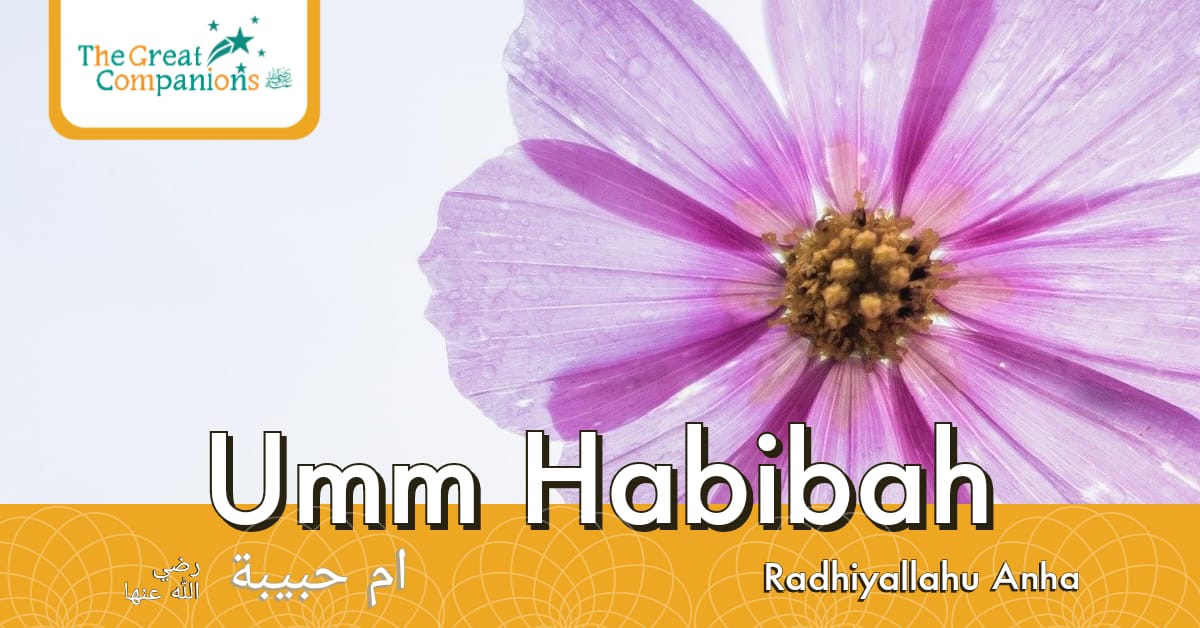 A Glimpse in to the life, merits and qualities of a great companion of our beloved Nabi ﷺ, Umm Habibah رضي الله عنها

● She was known for her respect, piety, thirst for knowledge and forgiving nature.

● Her name was Ramla, but she was mostly known as Umm Habibah رضي الله عنها (the mother of Habibah) due to her daughter Habibah.

● She first married Ubaydullah Ibn Jahsh who embraced Islam in the early years of Islam.

● After the demise of her husband, she was fortunate to marry our beloved Nabi ﷺ.

● After the demise of our beloved Nabi ﷺ, she lived for many years. During this time she stayed in Madinah and served Islam.

● Sayyidah Umm Habiba رضي الله عنها passed away in Madinah during the reign of Sayyiduna Muawiyah رضي الله عنه. She was 74 years at the time and she is buried in Jannatul Baqi.

1) She was very firm and steadfast on Islam that even after she was forced to leave Islam she stayed firm.

2) She was brave in the face of the most difficult times.

3) She had an amazing level of honesty and righteousness.

4) Her kind-heartedness and forgiving nature was very apparent.

5) She held a very dear position to our beloved Nabi ﷺ.

1) She was among those praiseworthy companions who performed two hijrah. One to Abyssinia and the other to Madeenah.

2) She narrated 65 Ahadeeth from our beloved Nabi ﷺ.

4) She accepted Islam and then remained firm even after her husband abandoned Islam.

She was very firm about practising hadeeth and would encourage others to do the same.

She heard from Rasulullah ﷺ on one occasion: A house in paradise will be constructed for that person who performs twelve rakah optional salah in a day.”

She says since that day I have always performed them (never neglected them).

Respect for our beloved Nabi ﷺ

After the peace treaty of Hudaibiyyah Abu Sufyan came to Madinah as a representative of the people of Makkah to clarify some issues.

He went to the house of his daughter, Umm Habibah رضي الله عنها. As he went in, she folded the bedding of our beloved Nabi ﷺ that had been spread out. He then said, “Why? Is the bed not worthy of me, or I am not worthy of it?” She said, Father! You are an idolater, while this is the bedding of Rasulullah ﷺ. Hence, you are not worthy to sit on it.

Imam Hakim and Ibn Sa’ad رحمهما الله narrate a lengthy Hadeeth in which she saw a dream of her husband leaving the fold of Islam and then a dream in which an oncomer said: Oh Mother of the believers!

She says: I interpreted it to mean that the Messenger of Allah ﷺ will marry me.

She further says: After my Iddah period finished, a message came to the king of Habashah (she was still residing there at the time) that the prophet sent a proposal for her..

Given the most dowry

Out of all the wives of the Prophet, she was given the most dowry, 400 Dinaar, given by the king of Habashah. Along with this, she was given many other commodities/items.

She was much fearful of the hereafter and very careful in keeping her dealings clear.