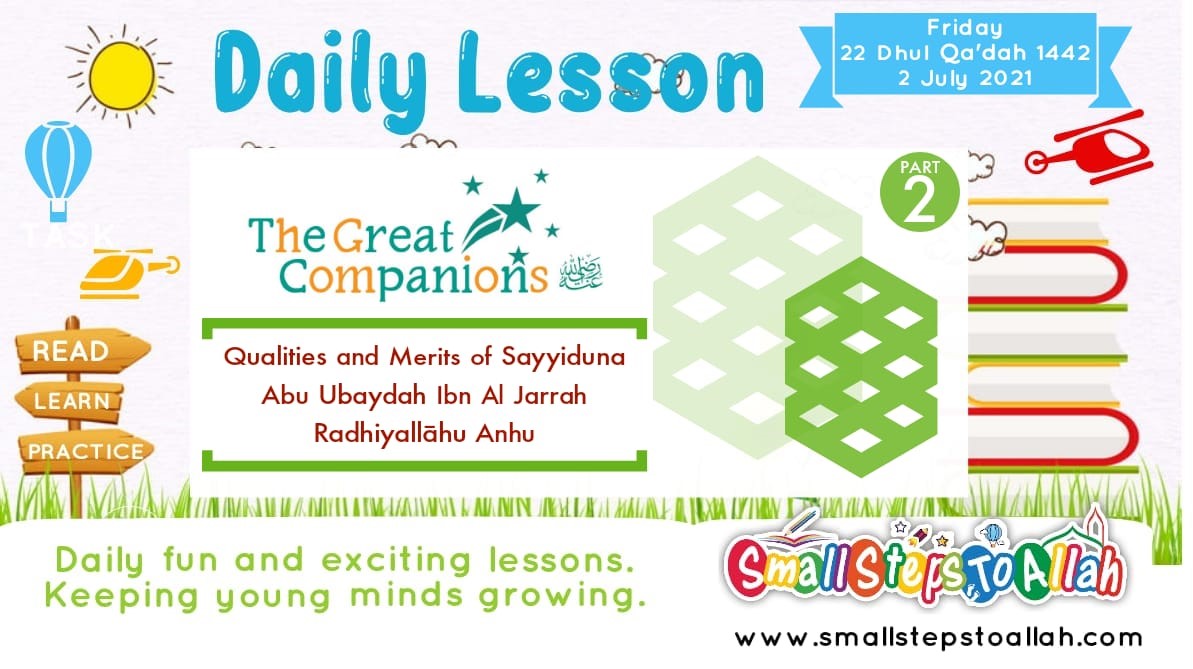 2) He had great leadership skills

3) He had little interest with the things of this world.

4) He was very trusty worthy

2) He was given the title ’The Trustworthy one of the Ummah’,

3) He was also amongst the 6 Sahabah that Sayyiduna Umar رضي الله عنه appointed after his demise to choose the next caliph.

4) He was described by our beloved Nabi ﷺ as an ‘Excellent Man’.

5) He was fortunate to carry out the hijrah and participated in all the battles.

6) He was made Leader and governor many times due to his praiseworthy qualities.

Praise from our Beloved Nabi ﷺ

Sayyiduna Hudhayfah Ibn Yamaan رضي الله عنه says that the people of Najran came to our beloved Nabi ﷺ and requested him to appoint an ameen over them and send him to them. He said, “ I will appoint an ameen who is rightly a trustworthy person.” The people looked expectantly to be appointed, but he appointed and sent Abu Ubaydah Ibn al Jarrah رضي الله عنه to Najran. (Saheeh Bukhari)

Abu Mulaikah says, “I heard `A’isha رضي الله عنها as saying, she was asked as to whom Allah’s Messenger ﷺ would have nominated as his successor if he had to nominate one.

Once when Sayyiduna Umar رضي الله عنه went to meet Sayyiduna Abu Ubaydah Ibn Al Jarrah رضي الله عنه and others in Syria, during the conquest of Jerusalem, he was happy when he saw that he was humbly dressed.

Even though the Muslims gained much booty under him, when Sayyiduna Umar رضي الله عنه went to his home, he saw that he had no possessions except a bed, a sword and a shield saying that it was enough for him. He asked him: “Do you have any food?