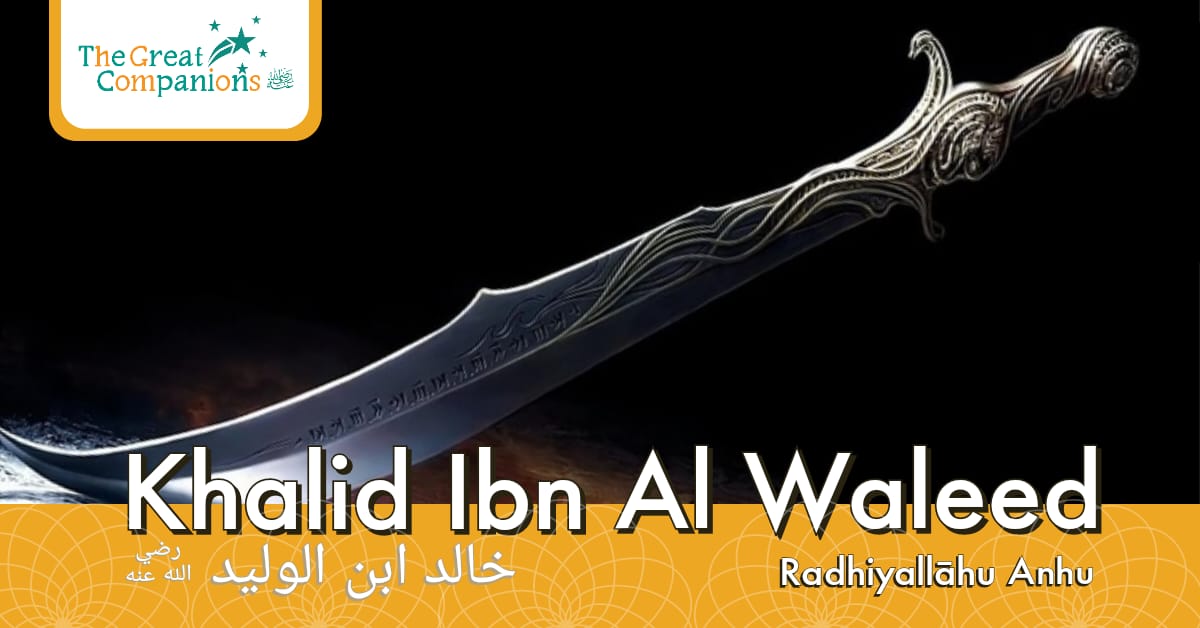 A Glimpse in to the life, merits and qualities of a great companion of our beloved Nabi ﷺ, Khalid Ibn Waleed رضي الله عنه

●He was known as Sayful Allah (meaning: the sword of Allah) because of his extreme bravery and courage in the battlefield. He had great knowledge of warfare and was a great commander. There was not a single part of his body which did not have any injuries.

●Before accepting Islam, he led the non-Muslim Army to victory against the Muslims in the Battle of Uhad.

●After the treaty of Hudaibiyyah, approximately in the 8th year after hijrah, he came to Madeenah and accepted Islam. This was just 3 years before the demise of our beloved Nabi ﷺ.

●Khalid ibn Waleed رضي الله عنه was appointed the commander and the leader of the Muslims during the time of Abubakr رضي الله عنه and he lost no battle in this time.

●He was very generous and would give from his own wealth to the leaders of other religions to bring them towards Islam.

● Khalid ibn Waleed رضي الله عنه passed away at the age of 50 and most historians say he passed away in Hims, Syria and was buried there.

May Allah Ta’aala grant Khalid Ibn Walid رضي الله عنه a great amount of reward for all of his services to Rasulullah ﷺ and to Deen and give us all the ability to emulate these great companions.

2) He was both a commander and a brave soldier in one. One could see his leadership qualities in and out of the battlefield but during battle he placed himself in the same ranks as all other soldiers.

3) Khalid ibn Waleed رضي الله عنه  despite his early enmity for Islam, stood and fought for the truth. When he saw the truth in Islam, he did not hesitate to accept and thereafter devoted his life to Allah Ta’aala.

4) Along with his bravery in the battlefiled, he had an amazing tactical mind and was very quick to think under pressure which made him very successful in all his battles.

5) He was humble and never objected to the decision of his superiors. As a leader and as a follower there was no difference in his dedication to any cause. This is a sign of his true sincerity.

Despite participating in many battles and having his entire body covered with the scars from battle, he did not attain martyrdom, he rather passed away on his bed. Many ulama say, that this was because of his title ‘Sayfullah – the sword of Allah’. How could the sword of Allah be defeated in battle?

1) Khalid ibn Waleed was best known for his bravery and strength in the battlefield. Our beloved Nabi ﷺ described him as the Sword of Allah. This was a very serious statement which showed his worth in the eyes of Allah and His beloved Nabi ﷺ.

2) While in command of the Muslim Army his had a remarkable record of never being defeated in any battle.

3) Imam az-Zahabi رحمۃ اللہ علیہ writes in his book “Siyar Alam An Nubala” that there was no area of Khalid ibn Waleed’s رضي الله عنه body which did not bear scars from his battles.

4) At the time of Umar’s رضي الله عنه death, it is recorded that he said, “If Khalid ibn Waleed رضي الله عنه was still alive I would have appointed him as a Khalifah” (Siyar A’lam Nubala)

5) After the demise of Abubakr رضي الله عنه, Abu Ubaydah ibn Jarrah رضي الله عنه was made commander of the Muslim Army. This change did not affect Khalid ibn Waleed رضي الله عنه in the slightest.

6) When Khalid ibn Waleed رضي الله عنه accepted Islam the first thing he asked from our beloved Nabi ﷺ was to ask Allah Ta’aala to forgive anything he had done to (harm) the Muslims. Our beloved Nabi ﷺ told him that his acceptance of Islam meant that all his past sins were forgiven by Allah Ta’aala.

7) Due to a life dedicated to the battlefield, he had a wish to be martyred. But this was not to be, so at the time of his death, he lamented that though he had scars and wounds all over his body. He was passing away on his bed, not as a martyr.

Khalid ibn Waleed belonged to the Quraysh tribe and play a pivotal role in defeating the Muslims in the battle of Uhad.

His brother Waleed Ibn Waleed had accepted Islam but it took Khalid some time before he began even thinking about embracing Islam.

His brother Waleed would write to him inviting him. On one occasion our beloved Nabi ﷺ asked Waleed: ‘Where is Khalid?’ Waleed replied: ‘Allah Ta’aala will bring him to us.’ Our beloved Nabi ﷺ said: ‘A man of his calibre cannot remain ignorant of Islam.

He had suddenly found the truth and wanted to travel to Madeena without wasting any further time and accept Islam at the hands of our beloved Nabi ﷺ.

Khalid met Uthman ibn Talhah, a close friend of his, and proposed that they accept Islam and join our beloved Nabi ﷺ in Madeenah. Uthman responded positively and the two men agreed to start their journey after midnight.

They travelled together until they met Amr ibn Al-Aas at a place called Al-Haddah. Realising that they were all heading to Madeenah with the same purpose, the three men joined together and continued their journey until they reached the outskirts of Madeenah.

Our beloved Nabi ﷺ had been informed of their arrival, and as they entered Madeenah they met Waleed. He said: ‘Be quick. Rasoolullah ﷺ has been informed of your arrival and he is pleased and waiting for you.’

The three men moved faster and more eagerly until they saw our beloved Nabi ﷺ at a distance, smiling. This smiled remained until the 3 men reached our beloved Nabi ﷺ. They exchanged greetings and Khalid ibn Waleed without wasting any time said: ‘I declare that there is no deity but Allah and that you are Allah’s Messenger ﷺ.’

Our beloved Nabi ﷺ called him forward and said to him: ‘I praise Allah for guiding you to Islam. I have always been aware that you are blessed with great intelligence and I have always hoped that your intelligence will lead you only to what is right and beneficial.’

Khalid ibn Waleed رضي الله عنه said: ‘O Messenger of Allah ﷺ, I am thinking of those battles at which I was fighting against the side of the truth. I request you to pray to Allah Ta’aala for me to forgive me.’ Our beloved Nabi ﷺ said: ‘When you embrace Islam, all your past sins are forgiven.’

Uthman and Amr then pledged their allegiance to the Prophet ﷺ.

Khalid ibn Waleed رضي الله عنه says, ‘By Allah, ever since our arrival in the month of Safar in the 8th year after hijrah the Prophet ﷺ consulted me about every serious matter which cropped up, ahead of all his other companions.’