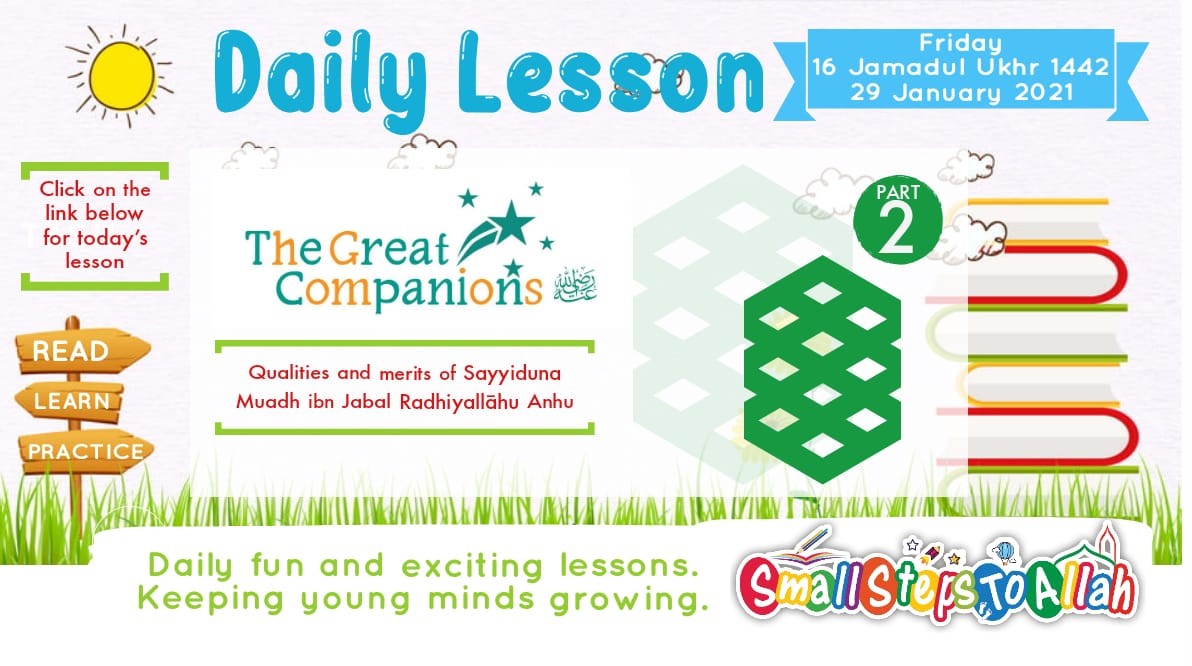 1) Sayyiduna Mu'adh رضي الله عنه had the most knowledge from the Sahabah regarding Halal and Haram.

2) He had special expertise in Qur'an and was chosen by Nabi ﷺ to teach Quran to others.

3) He had exceptional manners and piety due to which our beloved Nabi ﷺ loved him very dearly.

4) He was ever willing to sacrifice what he had for deen.

5)Wealth and material were of no significance to him and he would spend generously on others.

A special dua taught by our beloved Nabi ﷺ

Sayyiduna Mu'adh Ibn Jabal رضي الله عنه says that our beloved Nabi ﷺ held his hand and said, O Mu'adh, by Allah, I love you and advise you not to miss supplicating (making dua) after every Salaah saying:

Translation: O Allah, help me remember You, expressing gratitude to You and worship You in the best manner". (Abu Dawud)

1) Sayyiduna Umar رضي الله عنه would say that anyone who wants to find an Islamic ruling for anything should go to Sayyiduna Mu’adh Ibn Jabal رضي الله عنه.

2) His knowledge and trustworthiness can easily be seen by the fact he was chosen to go as a governor to Shaam.

3) Abdullah Ibn Mas’ood رضي الله عنه when praising Mu’adh ibn Jabal رضي الله عنه would say that he was like a Ummah and was fully devoted to Allah Ta’ala. (Isabah)

4) Our beloved Nabi ﷺ said good words about Muadh radhiyallāhu saying that “He was someone who Allah Ta’ala had led to good and right and also saying he was a good person.

5) In the time of Sayyiduna Abu Bakr رضي الله عنه. When Mu’adh رضي الله عنه express his desire to go to sham, Umar رضي الله عنه advised Abubakr to convince him to stay in Madeenah saying he was needed by the people of Madeenah as he could teach them and they would benefit from him.

Seeing Our beloved Nabi ﷺ for the last time!

Finally, our most beloved Nabi ﷺ said to him, “O Mu’adh! You may not find me here when you return. You may pass by my masjid and my grave.”

On hearing this, Sayyiduna Mu’adh رضي الله عنه began crying. Our beloved Nabi ﷺ was affected by his grief, he had to turn his face towards Madeenah and said then gave an amazing advice, “The people most closest to me are those with taqwa, no matter who they are and where they are”.