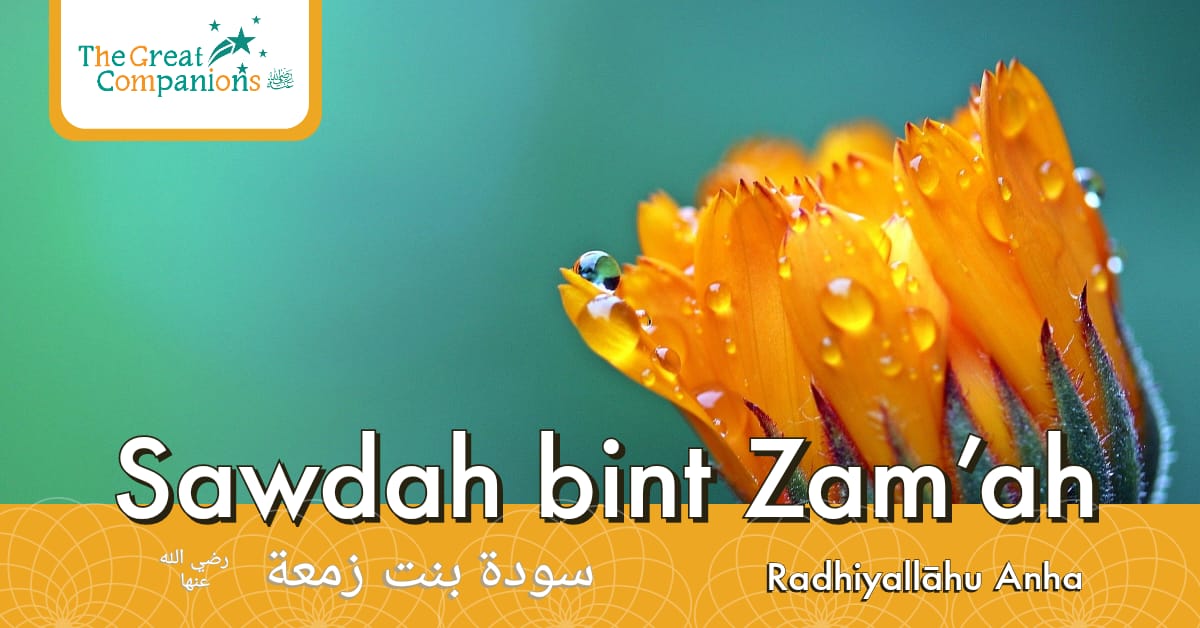 A Glimpse in to the life, merits and qualities of a great companion of our beloved Nabi ﷺ, Sayyidah Sawdah Bint Zam’ah رضي الله عنها

● She was known for her generosity, obedience, submission and kind-nature.

● She first married a companion by the name of Sayyiduna Sakran Ibn Amr رضي الله عنه and both husband and wife accepted Islam in the very early years of our beloved nabi ﷺ’s Nubuwwah (prophethood).

● After a few years of accepting Islam, they both performed Hijrah and migrated to Habsha (Abyssinia). A short while later on their return to Makkah, her husband passed away.

● She lived with our beloved nabi ﷺ for many years and took the responsibility of the household and family of our beloved Nabi ﷺ.

● She had extreme love and care for our beloved Nabi ﷺ.  She supported him immensely after he lost Sayyidah Khadijah رضي الله عنها.

●  After the demise of our beloved Nabi ﷺ, Sayyiduna Abu Bakr and Sayyiduna Umar رضي الله عنهما both treated her with utmost respect.

● Sayyidah Sawdah Bint Zam’ah رضي الله عنها passed away in Madinah towards the end of the reign of Sayyiduna Umar رضي الله عنه. She was 75 years at the time and she is buried in Jannatul Baqi.

1) Sayyidah Sawdah رضي الله عنها was very generous and would spend whatever she could on the poor.

2.) She was humorous and was known to make our beloved Nabi ﷺ laugh.

3.) She was known for her kind-heartedness and her giving preference to others over herself.

4.) She was noble and honourable and was respected by many companions.

1) She was among the first to carry out the great task of hijrah (migration) from Makkah to Habsha.

2) She was amongst the few companions who carried out two Hijrah. (To Abyssinia and also to Madeenah)

3) She enjoys the merit of being the first woman to marry our beloved Nabi ﷺ after the demise of Sayyidah Khadijah رضي الله عنها.

4.) She surpassed all the wives in her obedience and submission. She was also the eldest wife of our beloved Nabi ﷺ.

5) Aaishah رضي الله عنها mentions there is no woman more beloved to me than Sawdah رضي الله عنها. I would like her simple ways and I wish I could have a heart as pure and clean as her's.

Giving preference to others

On the occasion of the farewell pilgrimage, our beloved Nabi ﷺ addressed his wives and instructed them to remain in their homes after his demise. Sayyidah Sawdah رضي الله عنها adhered so strictly to this instruction that she never even went for hajj after this. She used to say, “I have performed hajj and umrah, and will now remain in my house as per Nabi ﷺ’s instruction.

She said to him on one occasion, “I joined you in salah last night and you remained in ruku for so long that I thought I would get a nose bleed. This is why I held my nose for quite long. On hearing this, our beloved Nabi ﷺ began to smile.

On one occasion Sayyiduna Umar رضي الله عنه sent a bag of Dirhams to her.

She remarked that dirhams are sent in bags just as dates are sent. Saying this, she distributed the dirhams immediately among the poor and needy.

Why not take our quiz on this great companion!