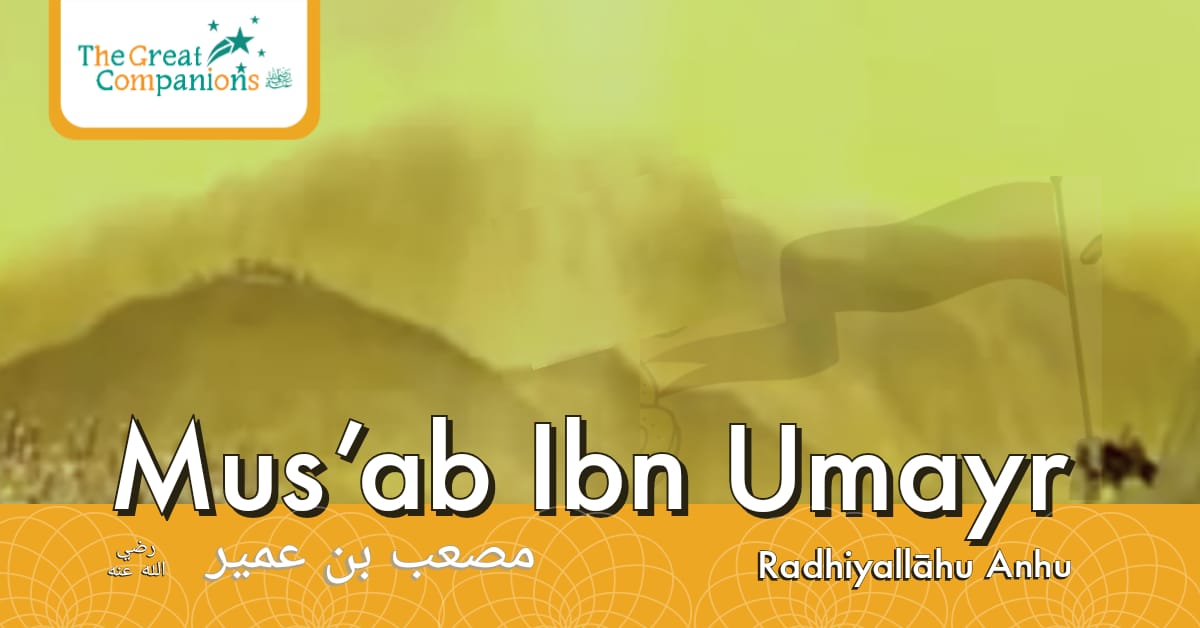 A Glimpse in to the life, merits and qualities of a great companion of our beloved Nabi ﷺ, Mus’ab Ibn Umayr رضي الله عنه

● Sayyiduna Mus’ab the son of Umayr was a very handsome, wealthy and intelligent companion of our beloved Nabi ﷺ

● He was born to a wealthy family and was brought up in great luxury and comfort and would walk the streets wearing the best garments and perfumes.

● He accepted Islam in the very early days of our beloved Nabi ﷺ’s prophethood. Out of fear of his family, he kept it a secret but they soon came to know and tortured him.

● He was known for his intelligence from a very young age and for this reason, he was allowed to join the senior gatherings of the Quraysh.

● He received the title of ‘Safeer Al Islaam’ – The Ambassador of Islam when he became the first person to be sent as an ambassador to Madeenah, which at the time was known as Yathrib. He was sent to educate and teach the people about Islam.

● He was further honoured with the opportunity to lead the first-ever Jumu’ah salah in Madeenah.

● Sayyiduna Mus’ab ibn Umayr رضي الله عنه carried out both the Hijrah, first to Abyssinia and then to Madeenah and was the first person to migrate to Madeenah

● He passed away at the approximate age of 40 and is buried in Madeenah near Mount Uhad.

May Allah Ta’ala grant a great amount of reward for all of his services to Rasulullah ﷺ and to our deen and give us all the ability to emulate his great companions in every way.

2) He was brave in the face of the most difficult times.

3) He had amazing will-power and had the ability to sacrifice anything for Islam which can be seen from the way he abandoned his life of luxury and adopted a life of simplicity only to freely follow Islam.

4) He had amazing characteristics and good character and was very knowledgeable with regards to deen which is why he was the first person to be made an ambassador of Islam.

5) He was very intelligent and from young, he would join senior gatherings of Makkah.

1) The prophet ﷺ saw him, one day, with only a single piece of cloth wrapped around him which was patched up. He remembered his days of luxury and wept for him.

2) He was amongst the few companions who carried out two Hijrah. First to Abyssinia and also to Madeenah.

3) He participated in the Battle's of Badr and Uhud, being the flag bearer in both battles.

4) He was the first person to migrate to Madeenah, he was also the first to be sent as a teacher of the Qur'an and from Makkah and he was imam for the first Jumu'ah salaah in Madeenah.

How he was martyred

Sayyiduna Mus’ab ibn Umayr رضي الله عنه was martyred in the battle of uhad. Being the flag bearer he was holding the flag with his right hand reciting:

Translation: ‘and Muhammad is but a Messenger. Messengers have passed away before him’ (Qur’an 3:144)

First, he was struck by the enemy on his right arm and as a result, his arm was cut off. Sayyiduna Mus’ab ibn Umayr رضي الله عنه picked up the flag and held it with his left hand but the enemy struck his left arm and cut that arm off too. But his determination was such that he held it with his upper arms to his chest, while still reciting the same verse.

At this point, he was struck in the chest with a spear and was martyred.

After the battle when our beloved Nabi ﷺ passed by his body, he recited the verse:

“Among the believers are men who have been true to what they have pledged to Allah. So, some of them have fulfilled their vows (by sacrificing their lives in the way of Allah.. (Qur’an 33:23)

Thereafter our beloved Nabi ﷺ said: “The Messenger of Allah ﷺ testifies that you are martyrs in the sight of Allah.”