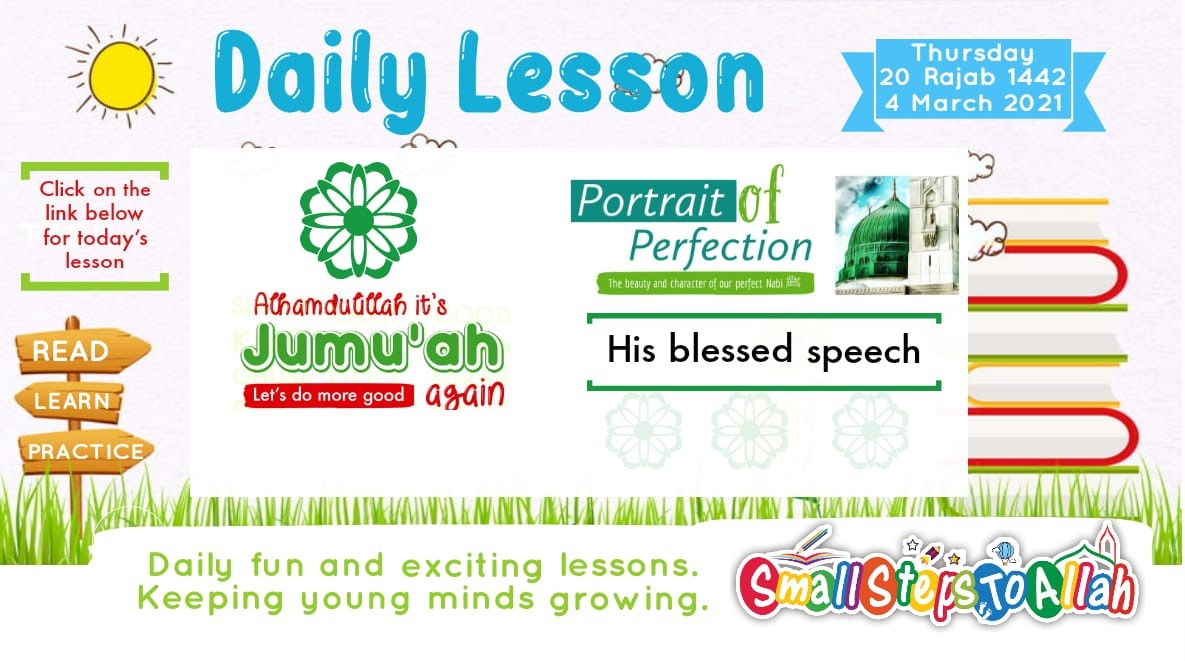 Sayyidah Aisha رضي الله عنها while describing the speech of our beloved Nabi ﷺ says that he did not speak quickly and continuously without a pause. Rather he spoke calmly and clearly, word by word.

She further says that his style of speaking was such that a person sitting in his company would easily remember what he said.

This was a very special quality of our amazing Nabi ﷺ.

Sayyiduna Anas ibn Maalik رضي الله عنه says that when our beloved Nabi ﷺ would explain something he would sometimes repeat a word three times if it helped the listener to understand what he was saying properly.

Note: Commentators say that this was his blessed practice if:

1) What he was explaining was difficult to understand.
2) The message was such that the listeners should think and ponder for a while.
3) The gathering consisted of a large number of people, and they were gathered around our beloved Nabi ﷺ, so he would face all three directions of the audience and would repeat his words in all three directions.

Repeating a message three times is the most he would do, if saying something two times was enough, then he would only say it twice.

Sayyiduna Hasan ibn Abi Talib رضي الله عنه says that he asked his uncle Hind ibn Abi Haalah رضي الله عنه about the speech of our beloved Nabi ﷺ. To which he said,

– Rasulullah ﷺ was always worried about the hereafter
– He always spoke clearly from beginning to end.
– He spoke concisely, where the words were less but the meaning was more.
– Every word he spoke was clearer than the previous one (this emphasises the clarity of his blessed speech)
– Everything he spoke about made sense, the meaning was complete and easily understood and remembered.

These narrations show the manner in which our beloved Nabi ﷺ spoke to people.