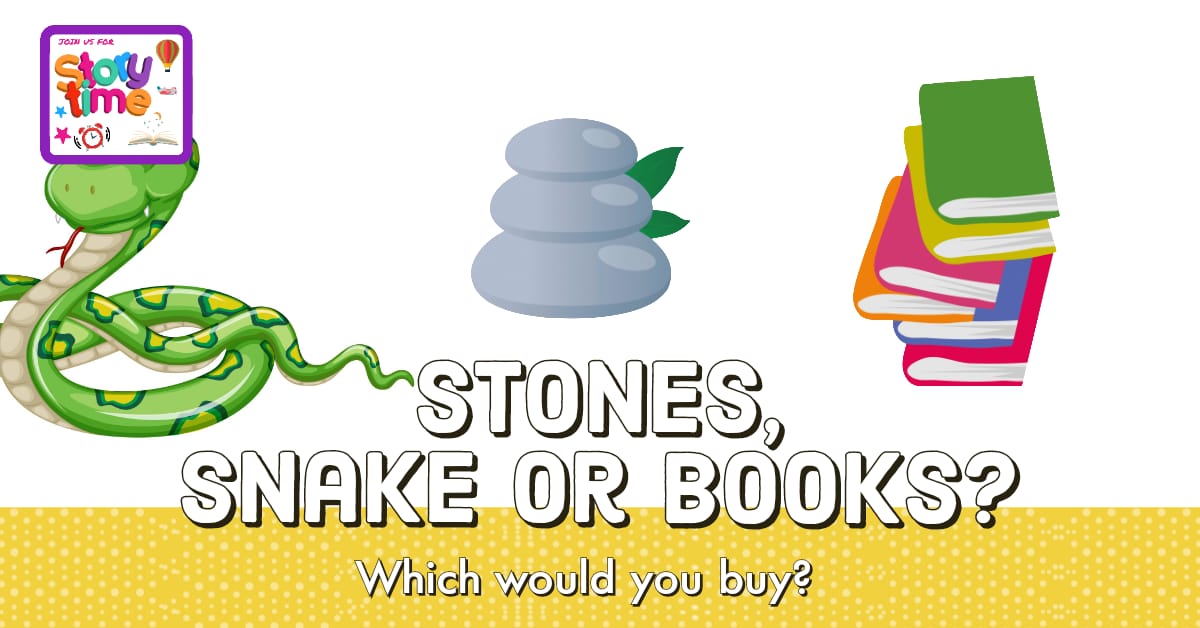 Stones, snake or books... Which would you buy?

Khalid was a kind young boy, but would sometimes become a little careless. His mother and father would advise him as much as they could. Once his father wanted him to learn a lesson about valuing his time.

He gave him £50 and said go buy whatever you like. To add to his test, Khalid’s father had asked one of Khalid’s friends to go shopping with him and take him to certain shops.

Khalid and his friend left the house and his friend said, I know just the right thing for you. He took him to a second-hand shop. In which there were all sort of items. Here, Khalid’s friend picked up a stone and said this is so good. You should buy this. Without thinking, Khalid paid £50 for this stone and returned home very excited. His parents were very disappointed and told him he had used £50 to buy an item which would neither benefit him nor harm him.

They took the stone from him and gave him another £50. The next day Khalid and his friend again went to the same shop. This time they found a snake in a cage. The shopkeeper said this snake is very dangerous as it is poisonous.

Again, Khalid’s friend became very excited and told him to buy it. And without thinking Khalid paid £50 and returned home with it.

His parents were in rage. They told him off and said not only have you brought something that will not benefit us but this time you have bought something which will now harm us!

The next day the parents give Khalid one more try and gave him £50 again. This time Khalid said to his friend, I will tell you which shop we will be going to today. Khalid took him to an Islamic shop and there he started purchasing books on hadeeth, seerah and lessons from the Quran. He even bought 3 miswaaks.

When he returned home, his parents were overjoyed. Khalid had learnt the lesson of valuing money!

They sat with him and explained to him regarding time saying, the way we gave you money to spend, Allah Ta’aala too has given you a life and time to spend. We now have a choice of how we spend this.

If we commit sins and disobey Him, it is the same example as when you purchased the snake. Not only will that time have been wasted, it will result in danger in the fire of Jahannam.

If we stay away from sin but do those actions which are non-beneficial, it will be just like that stone. When you reach the hereafter, those moments will have no benefit for you what so ever.

But if we spend our time in good actions, it is time well spent, just like the books you purchased, they will benefit us for a long time to come.

Like the parents explained to Khalid, time and life are very precious and we have a choice as to where we spend it. Like with Khalid, he was foolish to spend money on buying a stone or a snake, we would be foolish to spend our time in disobeying Allah or engaging in futile activities.

Once a moment passes, it has gone and never to return so we must use every minute we have and do as much as we can with it to make our afterlife full of blessings and happiness.