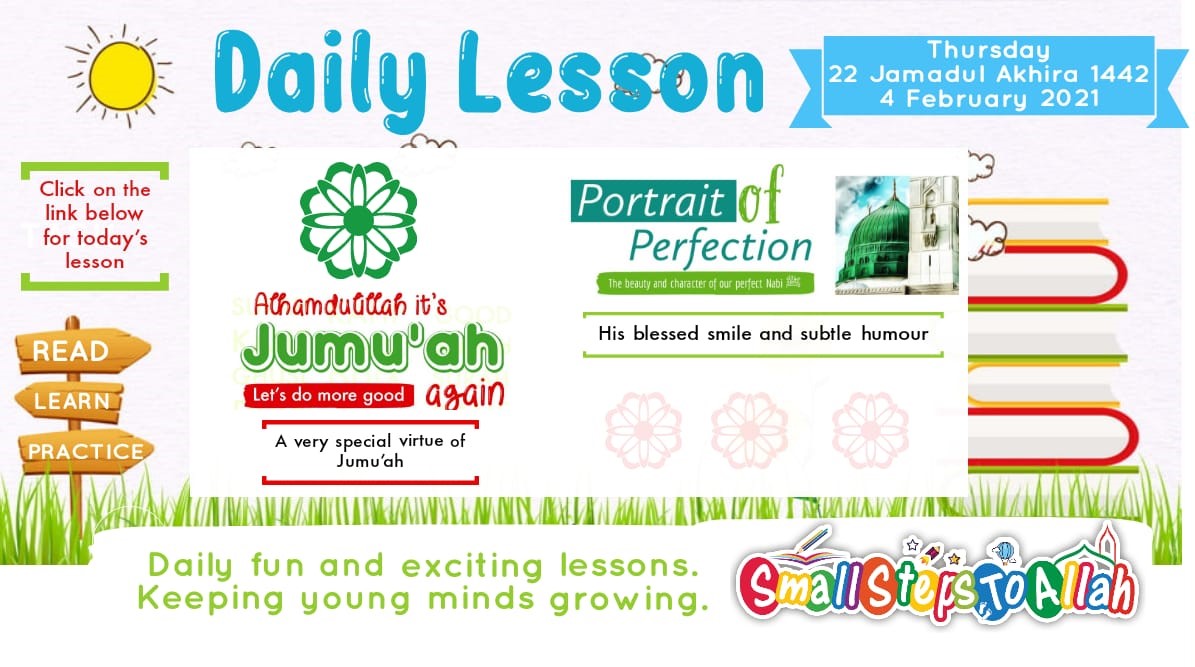 Once again Allah Ta’aala has given us Friday, which we know as Jumu’ah. This is the best day of the week, so it’s only right that we do the best actions we can on this day. Let us look at a very special virtue.

Sayyiduna Aws Ibn Aws رضي الله عنه reports that Rasulullah ﷺ said: Whoever (does the following on a Friday):

1. Takes a thorough bath,
2.Goes very early to the Masjid,
3. Goes walking,
4. Sits close to the imam (the mimbar where the imam will give the sermon)
5. Listens attentively to the khutbah (sermon)
6. Doesn’t engage in futile activity (like, talking to someone or fidgeting with his hair, clothes or mobile phone (cell phone) etc.

Will receive for every step: The reward for one year’s fast and one year’s Tahhajjud Salah!

This is no small reward, it is huge. This is why some experts on hadeeth have said that there is no other Sahih (authentic) Hadith with greater virtue than this one! (Mirqat, hadith: 1388)

His Humour and Playfulness

Our beloved Nabi ﷺ had a very happy nature and this nature would show in the way he always met people with a smile.

So much so that Abdullah Ibn Haarith رضي الله عنه says he never saw anyone smiling more than our beloved Nabi ﷺ.

With this, our beloved Nabi ﷺ was both playful and jokative with the companions and he did so without lying.

He used to say that, I do not lie, even while telling jokes. (Shama’il al-Tirmidhi)

A few examples of our beloved Nabi ﷺ subtle humour and playfulness with the companions:

Sayyiduna Anas Ibn Maalik رضي الله عنه says that once our beloved Nabi ﷺ playfully called him by the name, ‘Ya dhal udhu nayn’ (meaning the one with two ears). This was a playful gesture as this is a not the usual manner of calling someone but was also true.

Sayyiduna Anas رضي الله عنه also says that he had a younger brother by the name of Abu Umayr. He had a pet bird by the name of Nughayr, which he was very fond of. When this bird passed away, Abu Umayr became very upset. Our beloved Nabi ﷺ rhymingly said, ‘O Abu Umayr, what happened to Nughayr’.

Sayyidah Aisha رضي الله عنها says she was with our amazing Nabi, ﷺ while on a journey. They had a race and she beat our beloved Nabi ﷺ. A few years when she had put on a bit of weight they raced again and our beloved Nabi ﷺ won. Our beloved Nabi ﷺ reminded her saying this win was for the last one when you one.

Hasan Al Basri رحمه الله mentions an incident in which an old woman came to Rasulullah ﷺ and made a request, “O’ Messenger of Allah make Dua that Allah grants me entrance into Jannah.”

That woman started crying and began to leave. Our beloved Nabi ﷺ told one of the companions to quickly go and say to the woman that, she did not understand the comment. What our beloved Nabi ﷺ meant was that she will not enter in a state of old age, because Allah Ta’ala will make every woman young before entering them into Jannah.

These were just a few brief incidents of the humour and playfulness of our most beautiful, most perfect and most special Nabi ﷺ, who is a perfect role model for us all.