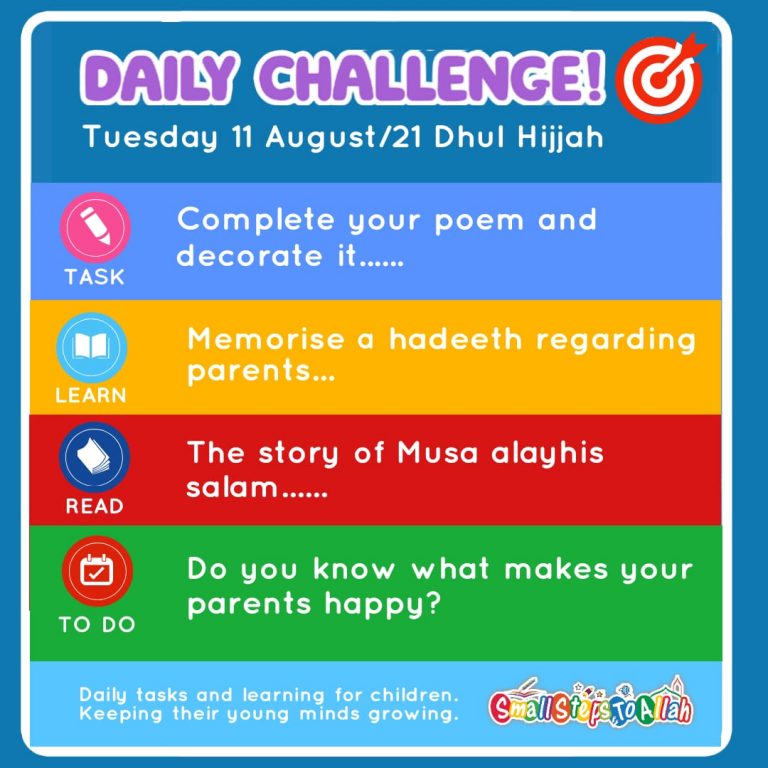 Write out the poem you wrote yesterday in neat. Decorate the paper with colours then give it to your parents.

Sunnah of the Week​

Look at the following hadeeth regarding our parents and memorise anyone of them.

The man asked, “Then who?” The Prophet sallallahu alayhi wasallam said:

The man asked again, “Then who?” The Prophet sallallahu alayhi wasallam said:

The man asked again, “Then who?” The Prophet sallallahu alayhi wasallam said:

Abdullah radhiallahu anhu, narrates that the Prophet Sallallahu alayhi wasallam, said: “The best of deeds or deed is the observance of prayer at its proper time and kindness to parents.”

Read through a Kitab on Aqa’id for 10 Minutes!

Dua of the Week​

This is another Dua to be recited when we wake up which we may not have learnt before so lets get learning and bring this dua into our lives!

All praise is for Allah who restored to me my health and returned my soul and has allowed me to remember Him.

Story of Musa alayhis salam and his neighbour in Jannah.

Musa alayhis salam once  asked Allah Ta’ala that who will be my neighbour in Jannah?  Allah ta’ala informed him that his neighbour will be a butcher.

Musa alayhis salam was surprised and wanted to meet this man, to see what special qualities he had.

Allah Ta’ala informed him where to find this man. So Moosa alayhis salam travelled to this place and he found the man by a river, selling meat.

Musa alayhis salam watched from a distance to see what was so special about this man. He saw the man cut meat and  from the meat he had cut he would keep a small part and sell the rest.

Musa alayhis salam approached this man in the late afternoon, saying, I am a traveller, and I need a place to stay. May I accompany you? The man replied, Yes, you may follow me, but I please don’t mind as I will be busy after we get home. You will need to wait until I have finished preparing a few things.

Once I am done, I will be able to  give you more attention.

When they reached the man’s home, they entered and the man lowered a large basket from an elevated platform. In the basket was a frail, elderly woman. He carried the basket down to the river, where he bathed her, washed her clothes, dressed her, combed her hair, and put perfume on her.

The butcher then sat her by the fire as he cooked for her the best quality meat he had. As soon as the meat was ready, he began to cut the meat and chewed on pieces of it. Once it was soft enough, he placed the meat into this old woman’s mouth. With every bite, her lips would move with some words of du’a.

After she was content, he brought the basket and returned it to the platform, and she fell asleep. He now turned to Musa alayhis salam by first welcoming him and offering to attend to his needs. Musa Alayhis salam asked who the woman was. ‘This is my mother’ the man replied. How long have you been serving her? ‘Ten years’ . ‘When you feed her, what does she whisper?’ asked Musa alayhis salam.

‘She makes du’a for me’ replied the man.

She says, ‘O Allah, make my son with the prophets of Allah.’

Look my young children how much benefit there is in showing kindness to our parents.

When we are dutiful and obedient to them they make dua for us from their hearts and very special things happen to us. So from today let us make our parents extremely happy and take their duas.

Have you ever thought what things make your parents happy? If we don’t know then it’s a good idea we find out.. Make a list and then make them happy.