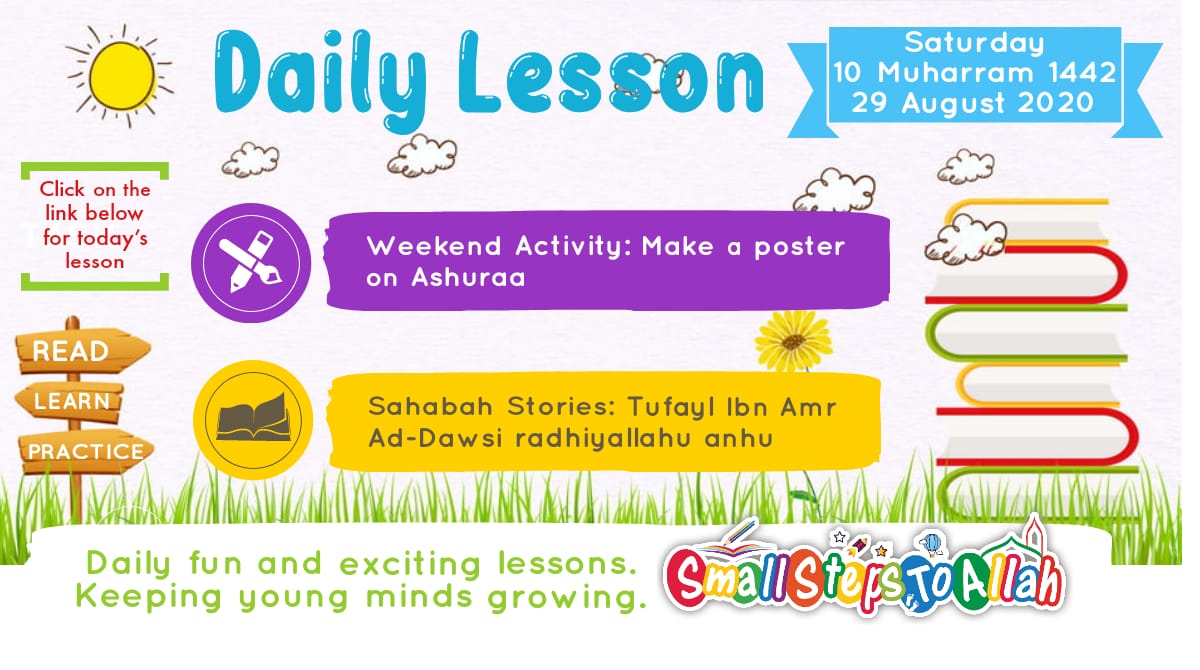 Can you design a beautiful poster on the  ‘Virtues of the day of Ashura’. Make it colourful. You can use yesterday’s Listen & Learn lesson to help you out. Once completed send it to us to see.

“The Day of ‘Ashura”

Tufayl Ibn ‘Amr Ad-Dawsi رضي الله عنه was the chief of a tribe by the name of Daws who lived in a place south of Makkah. He was a man of great qualities and talents and was ever willing to help others. His generosity and kindness was very well known and would not allow anyone to leave empty-handed from his door.

Along with these brilliant attributes he was very intelligent, and loved poetry and literacy. In fact, he was a poet himself. His love for meaningful words and phrases was such that at times he would be left spellbound when he came across any eloquently expressed phrase.

As the chief of Daws he had the respect of his people and why wouldn’t he? As he was always at hand to feed the poor, shelter the homeless and support those in distress.

In the 10th year of prophethood, Tufayl رضي الله عنه undertook a journey to Makkah to perform pilgrimage. Our beloved Nabi ﷺ was busy inviting people towards one Allah and the leaders of Quraish were making every possible effort to turn people against our beloved Nabi ﷺ.

Unaware of this Tufayl رضي الله عنه arrives in Makkah and is very quickly welcomed by the leaders of Quraish. Once he had settled, they all gathered around him and said:

“O Tufayl, you have come to our city and it is only right that we warn you about a man who claims prophethood. He has split our people and creates an environment of disagreement. We fear the same could happen to your people. So our advice is, to stay far from him and not even listen to a single word he has to say. His speech is magic through which he is able to cast a spell on people to turn against their near and dear ones.

The next day Tufayl ibn Amr ad Dawsi enters the masjid to gain blessings from the many idols which were placed around the Kabah. He was so scared of the ‘magical’ words of Rasulullah ﷺ, that he even blocked his ears with some cotton.

As he entered the masjid, his gaze fell upon our beloved Nabi ﷺ who was stood silently in salaah…

To be continued next week