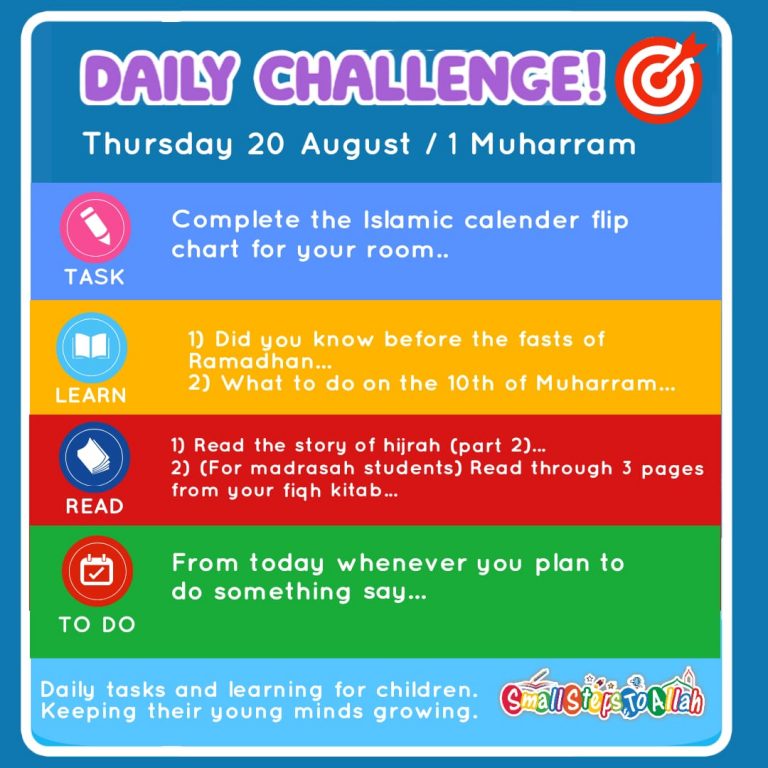 Complete the Islamic calendar flip chart for your room

1) 📄 Get 12 sheets of paper and on each one write the Islamic month in big writing across the top of the page. (be creative, as you can write it on coloured paper and  cut it and paste it etc.)

2) 📰 Under the name of each month write anything about the month and draw the picture.

3) 🗓️ Across the bottom write the important dates to look out for in this month.

5) 📌 Finally use your hole punch to make two holes and then use two small pieces of string to make a loop and hold the sheets together. Remember you want to be able to flip the pages over.

Once this is done you can display in your room and keep track of the Islamic year passing through.

Before the fasts of Ramadhan?

❓ Did you know before the fasts of Ramadhan were made compulsory the fast of the 10th of Muharram was compulsory for the Muslims?

Significance of the 10th of Muharram

The 10th of Muharram holds much significance. On this day we should:

I did not see Rasūlullāh sallallāhu ‘alayhi wasallam anxiously await the fast of any day, which he gave preference to over other days, but this day, the day of ‘Āshūrā. (Al-Bukhārī)

“One who generously spends on his family on the day of ‘Āshūrā, Allāh will increase (his provision) for the whole year.” (Al-Bayhaqī, At-Targhīb wat-Tarhīb)

In general the month of Muharram holds significance. We should try to fast as many days as we can in this month the reward for which is:

“One who keeps a fast in the month of Muharram will receive the reward of thirty fasts for each fast.” (At-Tabarānī, At-Targhīb wat-Tarhīb)

In the time of Nabi sallallahu alayhi wasallam the Jews would fast on the 10th of Muharram too. To differentiate the practice of Jews fast one extra day. Either on the 9th or the 11th.

The disbelievers of Makkah sent out search parties to arrest Rasoolullah ﷺ. A price of 100 camels was set for the capture of Rasoolullah ﷺ , At last, when the search of the neighbourhood was over and the disbelievers did not find them they left the area, Rasoolullah ﷺ and Sayyidina Aboo Bakr radhiallahu anhu left for Madeenah. They used a different road to Madeenah because they were still being pursued by the disbelievers. They rested during the day and travelled at night. They completed the journey in safety. Meanwhile, the Muslims of Madeenah received news of Rasoolullah ﷺ departure from Makkah and waited for his arrival. Every day the Ansaars went out of the city of Madeenah to welcome him but returned disappointed. Young girls sang songs of welcome from the roof tops, waiting for his arrival. At last, the beloved of Allah ta’aala Rasoolullah ﷺ accompanied by Sayyidina Aboo Bakr, arrived at a place called Quba outside Madeenah.

As the news of Prophet Muhammad ﷺ arrival in Madeenah spread throughout the city, the people climbed on the rooftops to get a glimpse of Rasulullah ﷺ. On his arrival they sang:

Tala’al-Badru Alayna  (O the White Moon rose over us)

Min thaniyyatil-Wada  (From the Valley of Wada’)

Wajaba al-shukru ‘alayna  (And we owe it to show gratefulness)

Ma da’a lillahi da  (Where the call is to Allah)

Jita sharrafta al-Madeenah  (You have brought to this city nobleness)

They had travelled for eight days. Rasoolullah ﷺ reached Quba on the 12th Rabiul Awwal thirteen years after he became a prophet of Allah. The chief of Quba, Amr bin Auf invited Rasoolullah ﷺ and Sayyidina Aboo Bakr radhiallahu anhu to stop over for a rest. Rasoolullah ﷺ accepted the offer and stayed for 14 days. During his short stay at Quba, Rasoolullah ﷺ built the first masjid in Islam, known as Masjid-ul-Quba.

The Ansaars (Helpers) of Madeenah waited for arrival of Rasoolullah ﷺ, the entry into Madeenah began on a Friday. The first Jumu’ah  prayer in Muslim history was read outside Madeenah led by Rasoolullah ﷺ with a 100 Muslims in an in an open field. Rasoolullah ﷺ rode his camel, named Quswa after Jumu’ah salaah and proceeded into Madeenah. As his camel passed by a particular family they would say: “Here we are with our homes and our lives. Come and live with us”. Some people would hold the reins of the camel and request Rasoolullah ﷺ, to live with them. Gently Rasoolullah ﷺ would refuse saying “Leave the camel alone, she is under the command of Allah ta’aala, she will stop where Allah ta’aala wants her to stop”

At last the camel stopped at a site belonging to two orphans of Banoo Najaar tribe. The nearest house was that of Sayyidina Aboo Ayoob Ansaari radhiallahu anhu. Rasoolullah ﷺ lived at his home.

Read through 3 pages from your fiqh kitab

From today whenever you plan to do something say إن شاء الله (insha’allah) which means ‘If Allah wills.’

For example, ‘inshaallah tomorrow I will do good work’, or ‘insha’allah I will see you tomorrow’ etc.

These words are magic and they will make whatever we plan to do easy for us.