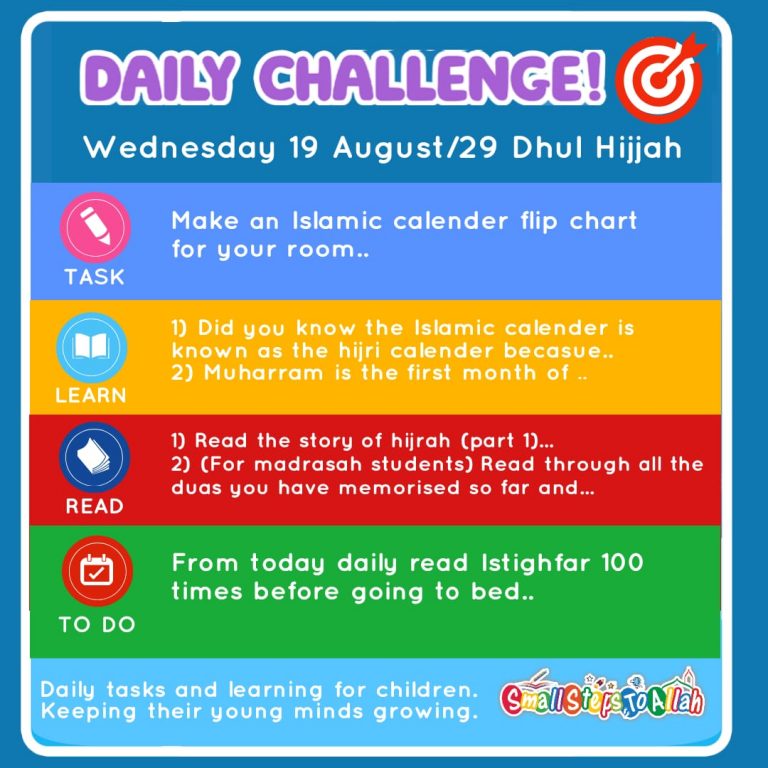 With the Islamic New year soon to start can you make an Islamic calendar flip chart for your room?

Check it and correct it!

~Tomorrow inshaallah we will make our calender!!~

The Month Of Muharram

Muharram is the first month of the Islamic calender. It Contains a very virtuous day known as Ashura, which is on the 10th of Muharram.

Tomorrow inshaallah we will learn a did you know lesson about the 10th of Muharram. And some virtues about this day.

As the Muslims grew in number the leaders of makkah gathered and decided the only way to stop Islam spreading was to Kill Rasulullah ﷺ. Rasulullah ﷺ was told by Sayyidina Jibraeel Alayhi Salam of the enemies plans. He left for Madeenah that very night.

Rasulullah ﷺ asked Sayyidina Ali radhiallahu anhu to sleep in his bed and also asked him to return the goods of the people he kept with him. Thereafter he quietly left the house, not seen by anyone. With Sayyidina Aboo Bakr radhiallahu anhu he made his way towards Madeenah. As his enemies looked everywhere for him he stayed in the cave of Thoor for three days and nights.

Read through all the duas you have memorised so far and any duas you don’t know learn them properly. Also make a plan to read them when you’re supposed to. The benefits will be:

1) Reward for following a sunnah
2) Engaging in the rememberance of Allah for large parts of the day
3) You won’t forget your duas so no need to ever revise them!

From today daily read Astaghfirullah 100 times before going to bed!

There are different forms of istighfar. Here are 3 you can learn and read.

“Whoever holds fast to istighfār, Allāh will create for him an exit from every difficulty and freedom from every sorrow and provide him from where he had not even imagined.” (Abū Dāwūd)