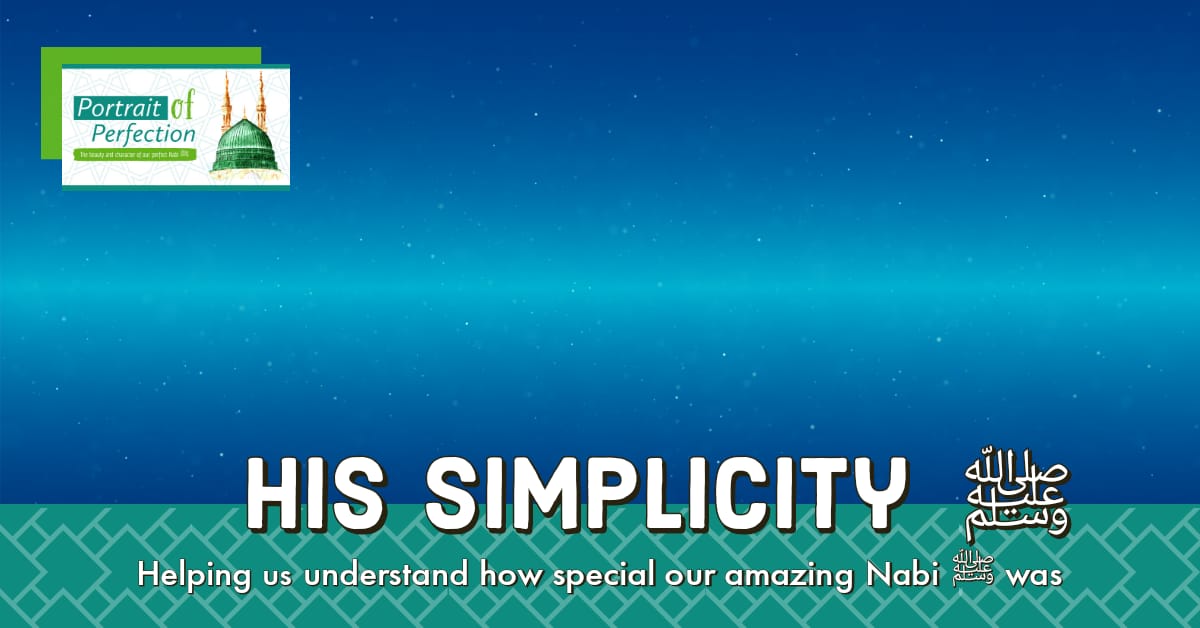 One special feature of our beloved Nabi ﷺ was his simplicity, which could be visible in every aspect of his blessed life.

Sayyidah A’ishah رضي الله عنها says that our beloved Nabi ﷺ was so simple in every aspect of his life that he used to repair his shoes, mend his clothes and occupy himself at home like every other person. (Sahih Ibn Hibban)

This simplicity was remarkably by choice and not forced upon our beloved Nabi ﷺ!

As we find in a hadeeth, our beloved Nabi ﷺ said that Allah Ta’aala gave him the choice that the valley of Makkah be filled with gold, but he chose not to accept it saying that he would prefer to be granted food one day, and hunger the day after. So that, during hunger he could be humble before Allah Ta’ala and remember Him, and when full, he could be grateful to Him.” (Tirmidhi)

Another example of our beloved Nabi ﷺ’s simple bedding can be learnt from the incident in which his wife Sayyidah Hafsah رضي الله عنها once folded his blessed bedding into four (it was normally folded in two) to make it softer and more comfortable for our beloved Nabi ﷺ. The next morning, our beloved Nabi ﷺ asked her not to do so as the softness made him sleep longer, and made him miss tahajjud salah! (Shamail)

Our beloved Nabi ﷺ used to adopt simplicity even in eating. Our beloved Nabi ﷺ would very rarely eat a full meal. Rather, there were times of such poverty that fire would not be kindled in his blessed house for as long as a month. (Shamail)

Sayyiduna Anas رضي الله عنه and similarly Sayyiduna Abu Talha رضي الله عنه once complained to our beloved Nabi ﷺ about hunger. They lifted their garments to show a stone they tied onto their belly. (They did this to numb the feeling of hunger). Our beloved Nabi ﷺ raised His garment and showed them two stones. SubhanAllah! His blessed condition of hunger was such that in order to numb the feeling of His hunger, He had to tie two stones onto His stomach! (Tirmidhi)

These were just a few examples of the simplicity of our most beautiful, most perfect and most special Nabi ﷺ, who is a perfect role model for us all.