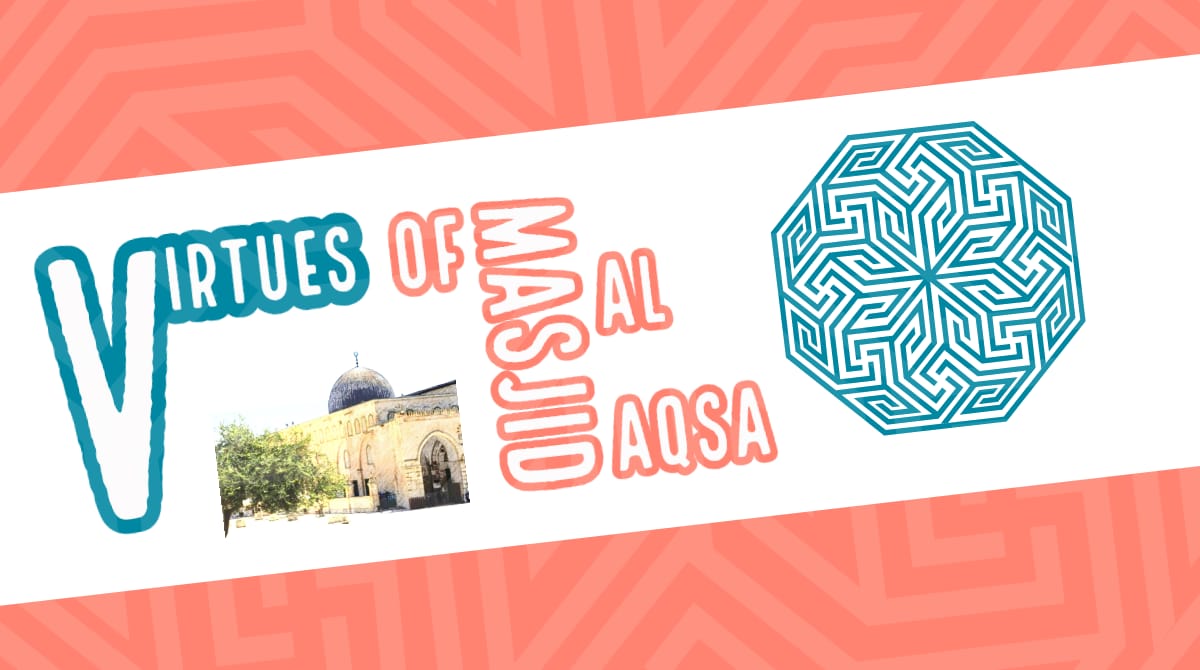 Previous
Next
Virtue 1 - It's the second Masjid on Earth 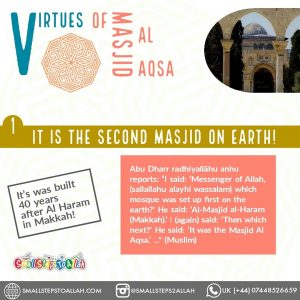 Masjid Al-Aqsa, also known as Baitul Maqdis was the second Masjid to be built on earth.

This means that when Adam عليه السلام was sent from the heavens to the earth, he was first instructed to build the Kabah for the worship of Allah Ta’ala.

Forty years later Masjid Al Aqsa was built. Ever since then these two sites have been sacred and been places of worship!

Virtue 2 - It was our First Qiblah! 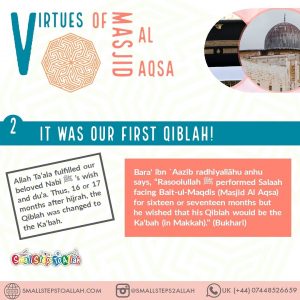 Millions of Muslims around the world face the direction of Makkah and more specifically the Ka’bah when performing salaah. But it wasn't always this way. Up until 17 months after hijrah (migration from Makkah to Madeenah) Muslims were commanded to face Masjid al Aqsa when performing Salaah!

Bara’ ibn ‘Aazib رضي الله عنه says: We prayed with the Messenger of Allah ﷺ (with our faces) towards Bait-ul-Maqdis (Masjid Al Aqsa) for sixteen months or seventeen months. Then we were made to change (our direction) towards the Ka'bah." (Bukhaari)

Our beloved Nabi ﷺ, due to his love for Makkah and the Ka'bah and also the fact that the Jews and the Christians were at the time also facing Masjid Al-Aqsa for Ibadah, desired the Qiblah of Muslims be towards the Ka'bah.

Nabi ﷺ would on many occasions look up to the heavens in wait for the command to change the direction of the Qiblah.

Finally, the verse of the Glorious Qur'an was revealed and Muslims were given the command to now turn their faces towards the Ka'bah.

For some, this news arrived while they were performing Salaah and so during salaah, they turned their Salaah direction towards the Ka'bah!

One such incident happened in a masjid known as Masjid Al Qiblatayn in Madeenah where a congregational Salaah was taking place and during Salaah they changed direction! Hence its name 'The Masjid of Two Qiblahs'.

The verse that was revealed to change the Qiblah is as follows:

"We see you turning your face towards the sky, so We shall surely turn you to a qiblah which you shall like. Now, turn your face in the direction of the Sacred Masjid (Al-Masjid-ul-Harām), and (O Muslims), wherever you are, turn your faces in its direction... "(Al‐Baqarah  2:144)

From this day till now, Muslims all around the world have been facing the Ka'bah and worshipping Allah Ta’ala. 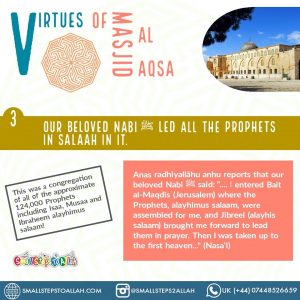 The land of Quds (Jerusalem) has been fortunate to witness many Prophets and many amazing incidents. One of which was our Beloved Nabi ﷺ leading all of the Prophets in Salaah.

Anas رضي الله عنه reports this incident saying he heard Our Beloved Nabi ﷺ saying: “.... I entered Bait al-Maqdis (Jerusalem) where the Prophets, عليهم السلام, were assembled for me, and Jibreel عليه السلام brought me forward to lead them in prayer...” (Nasa’i)

This incident took place on the miraculous night of Miraj when Our Beloved Nabi ﷺ was transferred from Makkah to Masjid Al Aqsa in a matter of moments!

When he arrived, he was welcomed by 124,000 Prophets and through the directions of Jibreel عليه السلام, Our Beloved Nabi ﷺ was appointed the Imam for Salaah and led all of the Prophets in Salaah!

What greater virtue can there be for a Masjid than the fact all the Prophets collectively performed Salaah in it! 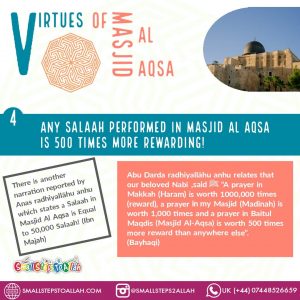 The Masajid are special places placed by Allah Ta’ala on earth for us to visit and connect with Him through His remembrance and worship.

Though all Masajid are special places holding special virtues, there are three Masajid which hold greater virtue and reward.

Abu Darda رضي الله عنه relates that our beloved Nabi ﷺ said, “A prayer in Makkah (Haram) is worth 100,000 times (reward), a prayer in my Masjid (Madinah) is worth 1,000 times and a prayer in Baitul Maqdis (Masjid Al-Aqsa) is worth 500 times more reward than anywhere else”. (Bayhaqi)

From this Hadith, we learn that te Masjid with the greatest virtue and reward is Al Masjid Al Haram in Makkah. Any salah performed here will bring the reward equal to 100,000 salah performed in another Masjid!

Again this shows the great position of Al Aqsa and its importance to every Muslim.

Virtue 5 - One of three Masjids to be visited 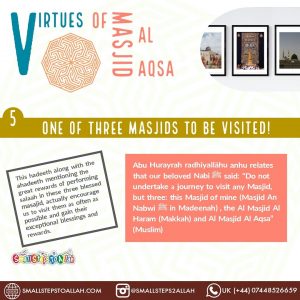 1) It doesn't mean a person can't travel to another Masjid at all. It's down to the reason for travel. 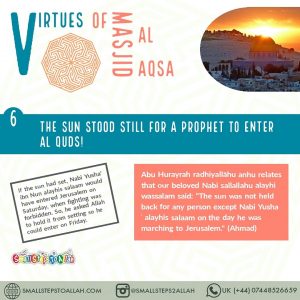 Al Quds and the surrounding lands of Al Aqsa have been blessed with many Prophets and many miracles.

One such miracle was the stopping of time in the time of Prophet Yusha عليه السلام!

Nabi Yusha عليه السلام, who was a descendant of Nabi Yusuf عليه السلام, was given the responsibility to march an army into Jerusalem and conquer it. They marched in on Friday and needed to conquer it before sunset as on Saturday they were forbidden to work or fight!

They were close to victory but so was the sun from setting.

So Nabi Yusha' عليه السلام looked towards the sun and said that you are subservient to Allah and so am I. And then turning to Allah he said, 'O Allah, stop it for me a little.’

His dua was accepted, and the sun stopped for him until Allah granted him victory...” [Muslim]

Our Beloved Nabi ﷺ said regarding this incident: “The sun was not held back for any person except for Nabi Yusha عليه السلام....." (Ahmad)

This is another unique blessing bestowed on the lands which contain Al Masjid Al Aqsa!

Virtue 7 - The One who donates and supports it 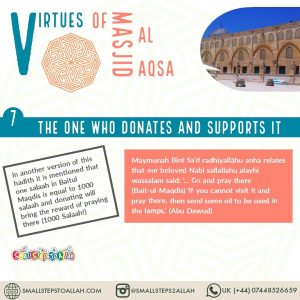 Every person should have a wish and desire to visit the three blessed Masjids (Al Haram in Makkah, Al Masjid An Nabawi in Madeenah and Al Masjid Al Aqsa in Jerusalem) as often as possible.

Regarding visiting Al Masjid Al Aqsa, we find a Hadeeth in which once our Beloved Nabi ﷺ was talking about Baitul Maqdis (Al Masjid Al Aqsa), and said: “... Go and pray there, for one prayer there is like one thousand prayers elsewhere.”

Sayyidah Maymunah رضي الله عنها who has initially started the conversation by asking about Al Baitul Maqdis asked: “What if I cannot travel and go there?”

Our Beloved Nabi ﷺ replied: “Then send a gift (Donation) of oil to light its lamps, for whoever does that is like one who goes there.”

This Hadeeth shows reminds us of the virtue of visiting Al Aqsa and gives us a great motive to donate as this not only will bring us the reward of Sadaqah but it will also be a substitute for us not being able to visit. 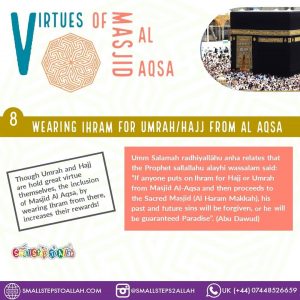 There are different places from which Ihram can be worn. Some more virtuous than others. In this hadeeth, we learn the virtue of wearing our Ihram from Masjid Al Aqsa and then performing our Umrah or Hajj.

As we find in a Hadeeth of our beloved Nabi ﷺ:

Umm Salamah رضي الله عنها relates that the Prophet ﷺ said: “If anyone puts on Ihram for Hajj or Umrah from Masjid Al-Aqsa and then proceeds to the Sacred Masjid (Al-Haram Makkah), his past and future sins will be forgiven, or he will be guaranteed Paradise”. (Abu Dawud)

This again shows us the special position Al Aqsa holds in the eyes of Allah Ta’ala.

Virtue 9 -Lands around it are blessed too 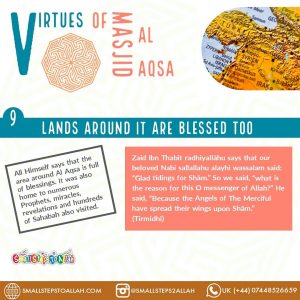 “Glad tidings for Shām.” So we said, “what is the reason for this O Messenger of Allah?” He said, “Because the Angels of The Merciful have spread their wings upon Shām.” (Tirmidhi)

In the Quran Allah Ta'ala mentioned, 'its surroundings are blessed.

With this the number of Prophets to have resided or passed by, the number of Sahabah, the number of revelations to various prophets, and angels and books. All indicate the great favour of Allah Ta’ala on the area around Al Aqsa.