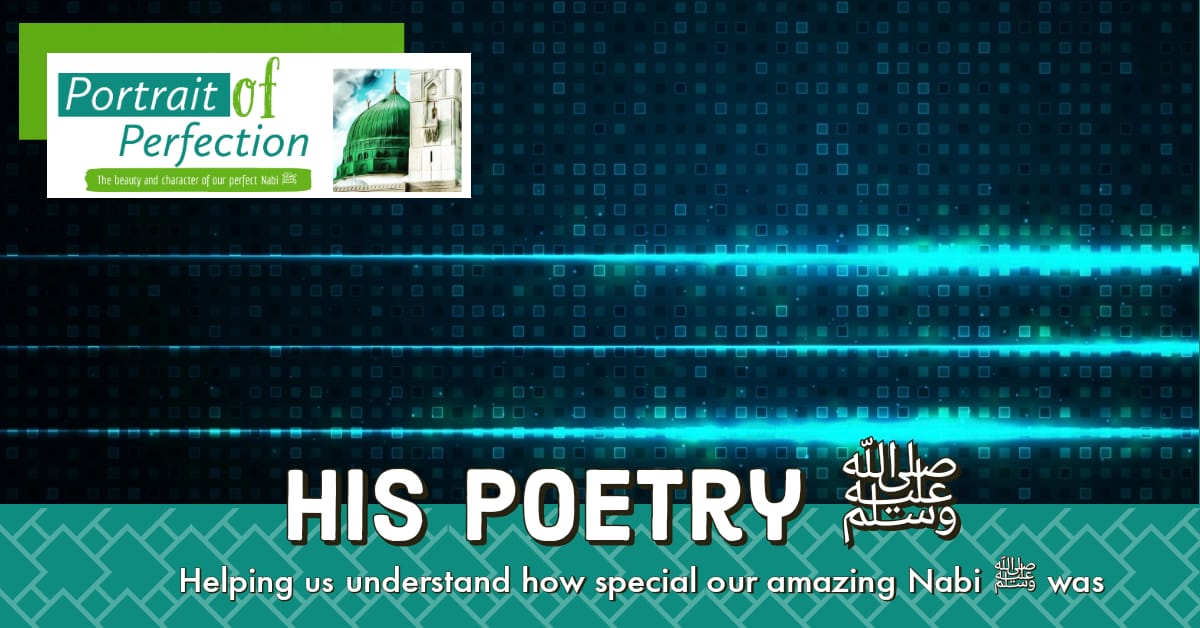 Our beloved Nabi ﷺ had a keen interest in poetry. He would often say phrases of poetry to inspire the Sahabah or would ask his companions to share poetic couplets with him.

Sayyiduna Jundub رضي الله عنه narrates that in one battle our beloved Nabi ﷺ’s finger was wounded. Our beloved Nabi ﷺ recited the following couplets whilst addressing his blessed finger:

It is important to remember that our beloved Nabi ﷺ was not a poet but at times the words he would utter would rhyme and have a poetic feel to them while on other occasions he would repeat the words of other poets.

On one occasion a person from the tribe of Qays asked Sayyiduna Baraa رضي الله عنه regarding our beloved Nabi ﷺ during the battle of Hunayn. He says our beloved Nabi ﷺ was seated on his mule and was reciting the following couplets:

‘I am the messenger of Allah and there is no lie about that; I am the son of Abdul Muttalib.’ (Tirmidhi)

Sayyiduna Ka’b Ibn Malik رضي الله عنه would prepare poetry on the topic of war and defeating the enemy. This instilled terror in the hearts of the enemy. (Sirat)

‘Beware; everything other than Allah is futile.’ our beloved Nabi ﷺ described these couplets as most true. (Shama’il)

Note: Sayyiduna Labeed رضي الله عنه was a renowned poet who accepted Islam after the Muslims migrated to Madeenah. He left poetry shortly after accepting Islam saying ‘The Qur’an is sufficient for me ‘

Note: Umayyah was a renowned poet of the era of Jahilyyah who did not accept Islam, but his thoughts were compatible with Islamic ideals as he believed in the oneness of Allah and the Last day. (Jam’ul Wasa’il)

Sayyiduna Jabir رضي الله عنه was fortunate to witness a hundred gatherings of our beloved Nabi ﷺ. He says the companions would recite poetry in his blessed presence, and they were reminiscences about the days of Jahilyyah [ignorance]. Our beloved Nabi ﷺ would remain silent and occasionally smile at them (Shama’il)

Click here to Print
Posted in Portrait of Perfection