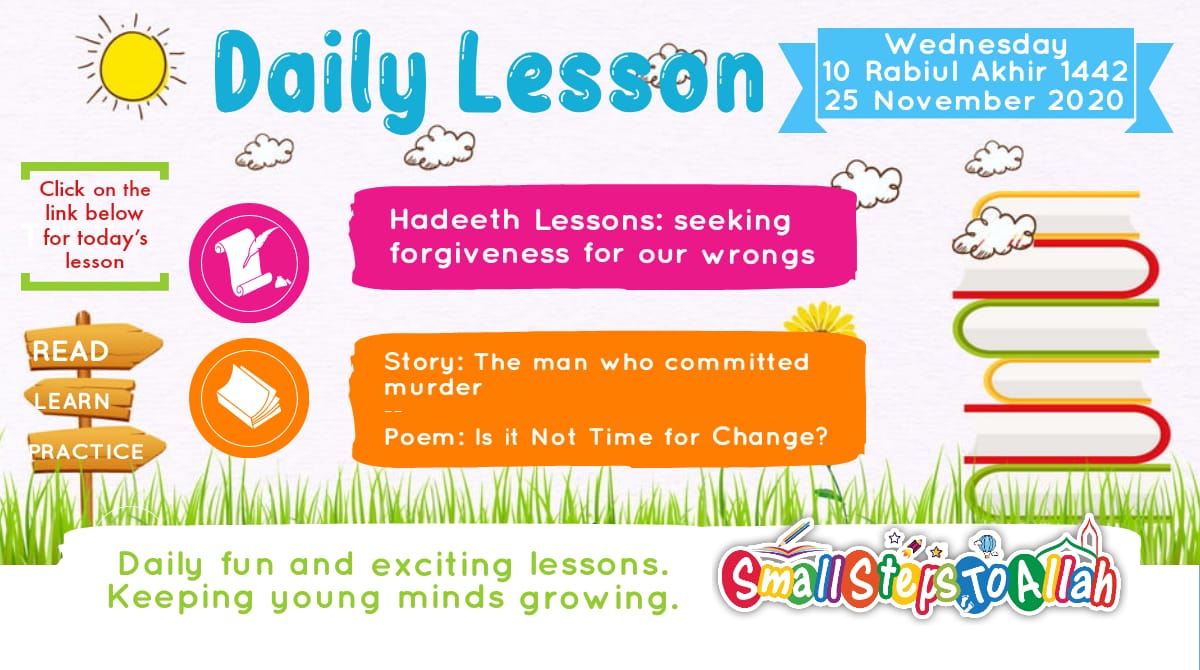 Seeking forgiveness for our wrongs

Our Beloved Nabi ﷺ said, “The person who repents from sin is like that person who has no sin”

Every believer wants to make Allah Ta’ala happy. But what happens if we do something wrong and make him sad and angry with us. For example, if we lie, cheat, show disrespect to our parents and miss salah etc. What can we do to make Allah Ta’ala forgive us and become happy with us again?

In this beautiful hadeeth we learn, that when we do something wrong and we do tawbah, which basically means we ask Allah Ta’ala for forgiveness and promise never to do wrong again, Allah Ta’ala forgives us.

What’s most amazing is we will be just like that person who never done anything wrong!

How to make tawbah?

1) We must first feel regret about what we’ve done.

2) We have to stop and leave the bad action we asking forgiveness for.

3) We have to make a firm decision never to do that wrong action again.

4) If we have done something that we need to make up for e.g. missing salah or missing a fast in Ramadhan, then we will have to do the qadha of these.

Also, if we had hurt someone or taken something which belongs to someone, we will need to ask their forgiveness and return what’s theirs.

1) We must try our best not to do anything wrong.

2) If we do anything wrong, we must make tawbah.

4) We should never do something wrong thinking we can ask for forgiveness afterwards. Tawbah is not for this.

5) Be sure never to tell anyone about something wrong we done. It should remain between us and Allah Ta’ala.

Our beloved Nabi ﷺ once told his companions about a man who lived many years before them. This man was not very nice. In fact, he was so cruel that he had killed 99 people!

But Allah Ta’ala is extremely kind and no matter how bad a person is, he gives everyone a chance to change and become good.

So, after killing 99 people his time for change arrived. He felt a sudden regret and wanted to change his past and make Allah Ta’ala happy. But unfortunately, he didn’t know how.

He went to the people in his town and asked who the most knowledgeable and pious person of their town was. He wanted help to change and ask Allah Ta’ala for forgiveness. They sent him to a monk who lived in their town.

Without wasting any time, he rushed to the monk and explained his life story to him. He asked the monk, “Do you think Allah Ta’ala will forgive me?” The monk was not very knowledgeable and said to him, “No! You will not be forgiven. You have done too many wrongs to be forgiven!”

Having lost all hope the man said, “In that case, I may as well kill you, too!” So, he killed this monk and took his total murders to 100!

But his chance to change was still not over yet. He now felt even more regret and so again asked the people to guide him to the most learned person on the earth. He did not mind travelling but he wanted real guidance and he wanted to be forgiven.

They this time guided him to a very pious Alim of that time. Again, without wasting any time he rushed to this Alim. He explained his life story and expressed his sadness and regret over his actions. He asked this Alim, “I have killed 100 people, will Allah Ta’ala forgive me?”

This Alim had the knowledge of Allah Ta’ala with him and he knew Allah Ta’ala loves to forgive. So, he said ” Of course! Allah Ta’ala will most definitely forgive you”. The person was overjoyed and wanted to know more.

The pious man explained what was needed to be done in order to be forgiven by Allah Ta’ala. He said: “Go to such and such a place, there you will find people who worship Allah Ta’ala a lot. Stay there and do not return back to your land ever again.

So, the man very happily took this advice. After all, he wanted to change and make Allah Ta’ala happy.

He set off to the place advised by the Alim. Unfortunately, along the way, the person passed away. The Angels of mercy and the Angels of punishment both came to take his soul. The Angels argued, as to who should be allowed to take his soul. The angels of mercy argued that he had repented and was about to start a new life so he should go to Jannah. The angels of punishment said, he had committed too much wrong to deserve any mercy and should be taken to Jahannam.

The Angels measured the distance and though he was closer to his old homeland, Allah Ta’ala order that part of the earth to stretch a little and because of this, they found he was closer to the new land than the old one, only by a few inches (one hand span). It was so close, but the decision had been made and the angels of Mercy were ordered to take his soul and enter him into Jannah.

[Story is based on a hadeeth found in sahih al bukhari]

As we learn from this story, Allah Ta’ala is very kind and is very forgiving. No matter how bad a person is, he will always have chances to become good and if he asks Allah Ta’ala to forgive, Allah Ta’ala will definitely forgive.

Another lesson we learn is whenever we need Islamic/Deeni guidance, it is important to go to a reliable Alim who is pious so that we can be given correct guidance.

Is it not Time for Change?

For how long will you tread astray
Keeping yourself from Allah away
Listen to the whisper from Allah,
Is it not yet time for change?

The feelings desires heart full of lust
The heart with neglect covered with rust
Selfishness and fun, but how long?
Is it yet not time for change

Listen and you will soon hear it
A whisper with this message within it
A call and chance to make change
Are you ready now to make a change? 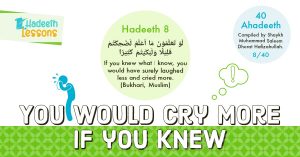 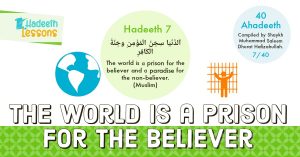 The world is a prison for the believer