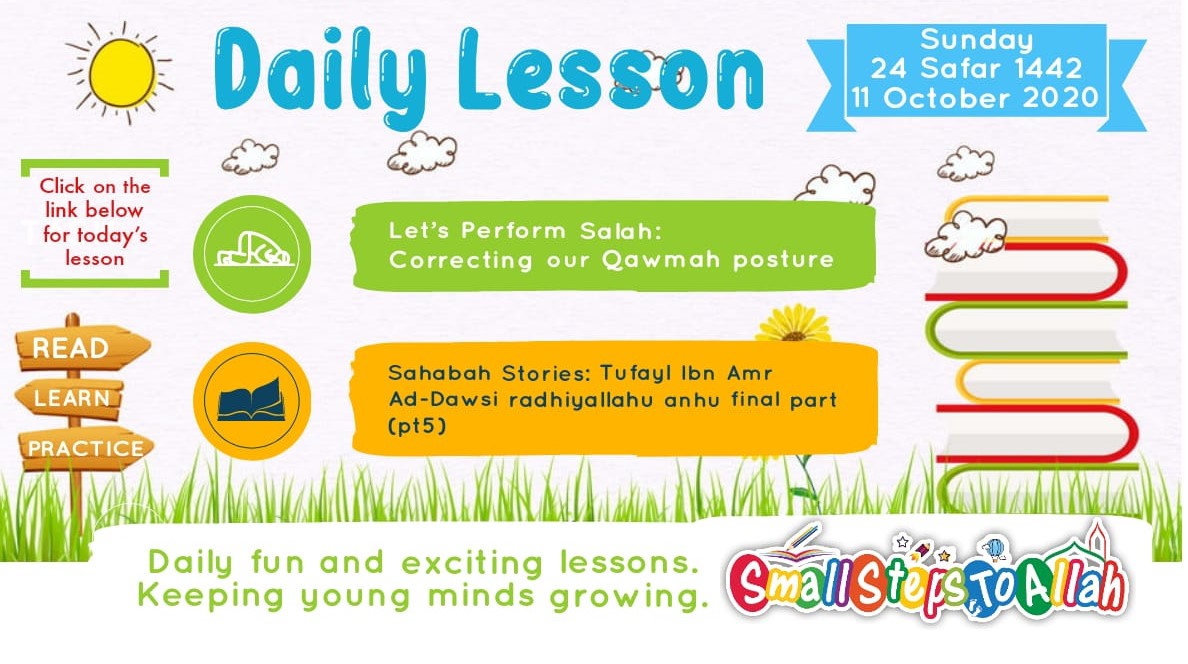 Our Beloved Nabi ﷺ said: “Hold on to abundance of sujood for certainly each time you prostrate to Allah, He raises your rank by a degree and erases a bad deed.”
(Sahih Muslim – 488)

Helping to Correct our Salah

We are now ready to go into Sajdah (prostration).

This will be done in the following way:

A ) Whilst going down (into sajdah) say, Allahu Akbar

B ) Keep the back straight as you go down

C ) When you reach the ground place the body parts on the ground in the following order:

D ) The face should be placed between the hands with the hands resting on the ground with the fingers together, pointing towards the Qiblah

Note: The gap between the stomach and thighs should be such that a baby goat could pass through it.

● (Girls) will keep their stomach and thighs close together and rest their elbows on the ground.

● (Boys) Keep the toes firmly on the ground pointing towards the Qiblah. At no point should they be raised or lifted off the ground.

● (Girls) The feet will be laid flat horizontally to the right side.

Tufayl رضي الله عنه says I followed this command of Rasulullah ﷺ and returned to my people and invited them to Islam. During this time, Rasulullah ﷺ and the Muslims migrated from Makkah to Madinah, the battle of Badr, Uhad and trenches took place, and I was finally ready to return to Rasulullah ﷺ.

When Tufayl رضي الله عنه arrived in the blessed company of our most beloved Nabi ﷺ, he had 80 families with him who had accepted Islam. Seeing them all our beloved Nabi ﷺ was overjoyed and taken with happiness.

Tufayl رضي الله عنه remained with our beloved Nabi ﷺ until the conquest of Makkah in the year 8AH. It was during this conquest when he saw our beloved Nabi ﷺ cleansing the Kaʿbah of the idols which had surrounded it that he remembered the idol of Amr ibn Hamama which his people used to worship before Islam.

He took permission from our beloved Nabi ﷺ and set out to remove this idol so that it could not be a means of misleading anyone else in the future.

When he reached this idol and set it ablaze the people who were present were fearful that something may happen to Tufayl رضي الله عنه.

But Tufayl رضي الله عنه was not moved with fear, and he said some poetic verses:

O Zil Kafeen (name of the Idol), I am not one who worships you
We were born long before you
I surely have filled fire within your heart

These flames destroyed the idol along with any remaining effects of idol worship in the tribe of Daws.

After completing this task, Tufayl رضي الله عنه returned to Madinah and remained in the company of our beloved Nabi ﷺ.

It this time they took to the battlefield against Musaylimah al-Kadhdhab and then took part in the battle of Yamamah.

It was on the way to Yamamah that Tufayl رضي الله عنه saw a dream which he shared with the companions. He said:

“I have seen a dream; can anyone interpret it for me?”

He continued, “I have seen that my head had been shaved and a bird flew out of my mouth and a woman placed me in her belly and that my son ‘Amr was searching for me but a barrier rose between us, preventing him (from finding or reaching me).”

After narrating his dream and not hearing a satisfactory interpretation for it, He himself interpreted it saying that the shaving of his head was to say that in the battle of Yamamah his head would be separated from his body. The bird emerging from his mouth was in fact his soul leaving his body and the woman placing him in her belly was the earth which will be dug up for his burial. Tufayl رضي الله عنه was happy and ready for martyrdom. As for his son looking for him, it means he too will wish for martyrdom, but he will not get it in this battle.

In the Battle of Yamamah this amazing Companion of our beloved Nabi ﷺ, Tufayl bin ‘Amr Ad-Dawsee رضي الله عنه achieved martyrdom while his son ‘Amr lost his right hand.

In the time of ‘Umar bin Al-Khattab رضي الله عنه, when ‘Amr refused to partake from food presented before him (out of shame of his hand), Umar رضي الله عنه said: “By Allah, you are the only one who has a limb in Paradise. (Referring thereby to his hand)”

Amr رضي الله عنه was possessed with a wish to attain martyrdom since his father’s demise and in the Battle of Yarmook, he fell and attained his heart’s desire.