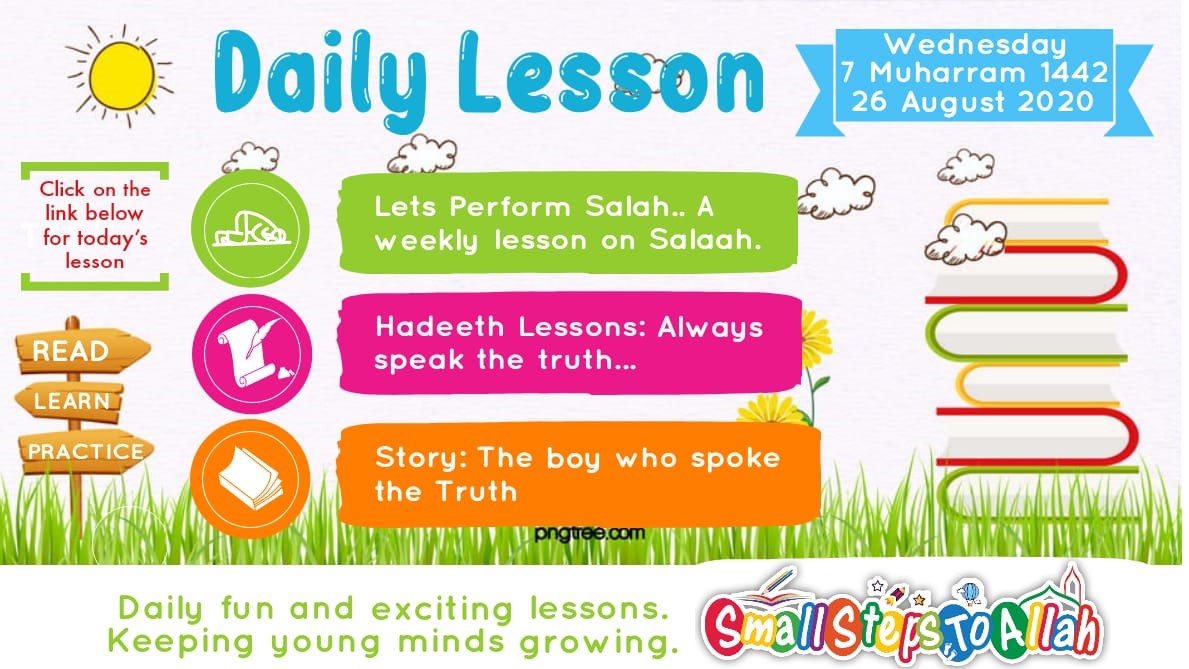 Our Beloved Nabi ﷺ said: “The Coolness of My Eyes is in Salah”

Helping to Correct our Salaah

1️⃣ We must be in the state of wudhu, as without wudhu our salaah is not valid.

2️⃣ We must stand upright facing the Qiblah. We should not adopt a lazy posture or lower our head or shoulders too low.

3️⃣ Our hands should be by our sides.

4️⃣ The feet should be a comfortable width apart (it is mustahab for the feet to be 4 fingers apart as this is the comfortable position for most people) and toes should be facing the Qiblah.

Being truthful and honest is part of being a good Muslim. A Muslim doesn’t lie no matter what the consequence is because he always knows that lying will save him from small difficulties for a short while in this world but will result in big problems and troubles in the hereafter.

What’s more, lying always catches up with us. We can only lie so much. Somewhere we will slip and the truth will come out.

A person who lies also loses the trust of the people.

So always speak the truth and remember this truth will take you to Jannah Insha’Allah.

A long time ago there was a young boy by the name of Abdul Qadir who lived with his mother in a place called Jilan, in Iran. His mother was a very pious lady. She always reminded Abdul Qadir how important it was to worship Allah Most High, to read the Quran Kareem and to have good manners.

Abdul Qaadir grew up with a love for reading and writing. He completed all his early studies in Jilan and wanted to learn more. All the big and important madrasah were very far away in Baghdad in Iraq. He asked his mother to give him permission to go to Baghdad to learn. His mother was very pleased that Abdul Qaadir wanted to learn so agreed for him to Baghdad for his education.

His mother gave him forty gold coins. She carefully sewed the coins inside his coat sleeve for safekeeping. She told him to look after the money and to spend it wisely.

After all the preparations had been made, Abdul Qaadir was ready to set off on his long journey to Baghdad.

His mother gave him one final word of advice: “My dear son, always speak the truth no matter what happens.”

Abdul Qaadir joined a caravan travelling to Baghdad. After travelling for a few days the caravan was attacked by a group of robbers. They searched everyone and stole all their valuables. They came to search Abdul Qaadir.

One of the robbers asked him, “What have you got for us?”

“I have forty gold coins” Abdul Qaadir calmly replied. The robbers thought he was joking and took him to their chief.

The chief of the robbers looked at Abdul Qaadir angrily and said Where are your forty gold coins?”

Abdul Qaadir pointed to his coat sleeve sewed them in there for safekeeping. He took out the gold coins from the sleeve and showed them to the chief of the robbers.

The chief of the robbers was shocked to find the young boy had been telling the truth. He asked Abdul Qaadir why he told him where the gold coins were.

Abdul Qaadir said to the chief of the robbers, ” I am going to Baghdad for my education. My mother told me to always speak the truth no matter what happens.”

Upon hearing this, the chief of the robbers felt great shame at what he and his group had been doing. They had been telling lies and stealing from people all their life. In his heart, he asked for forgiveness from Allah for all the bad things they had been doing.

He hugged Abdul Qaadir and decided to return all the valuables to the people asking them to forgive him. From that moment all the robbers became good people fearing Allah. They accompanied the caravan until it reached Baghdad safely.

The young boy went on to become one of the best, learned people in the whole of Baghdad.

He is famously known as Shaykh Abdul Qaadir Jilani.

Speaking the truth has many benefits. So we should not be scared to speak the truth. In fact, speaking the truth will always help us out. Look at the boy in this story and see how the truthfulness of one young boy changed the lives and habits of so many adults.

So be strong, be brave and always speak the truth.