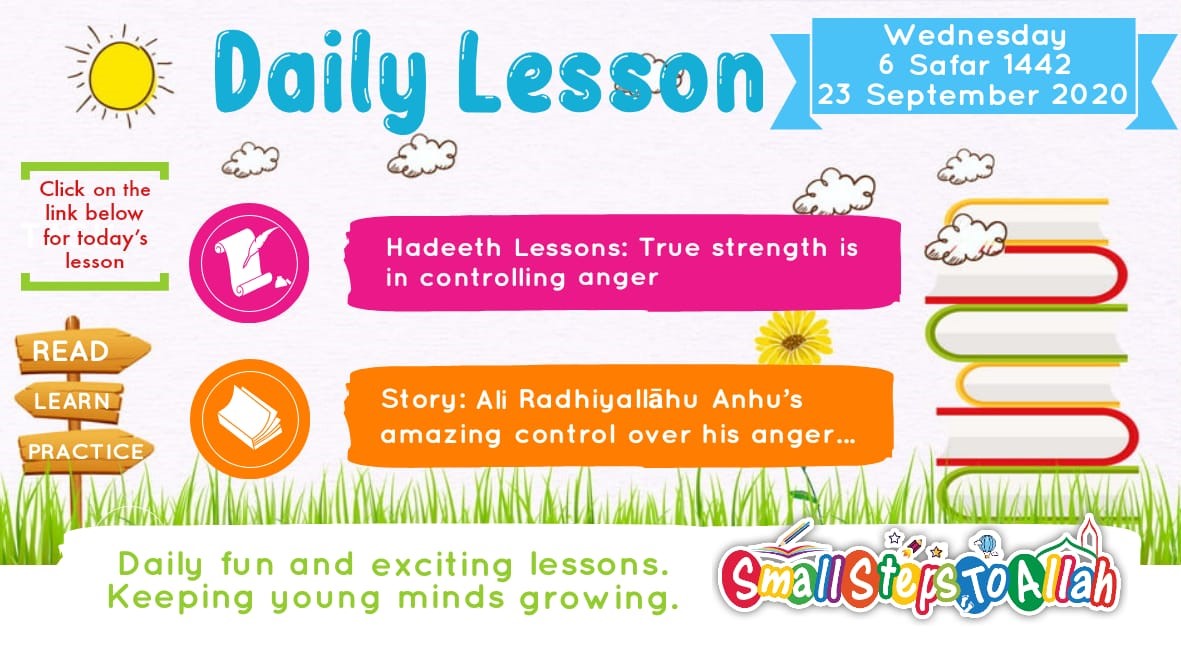 True Strength is in Controlling Anger

In fact, from this hadeeth, we learn about another strength which is the real strength. This is the strength to control one’s anger.

How we can control our anger?

Our amazing Nabi ﷺ has taught us what to do when we become angry. Think of it as a secret weapon to gain the true strength required to control your anger!

If anger still remains then perform Wudhu – Wudhu helps cool a person down.

When a person becomes angry Shaytaan takes control of a person and leads him towards a regrettable outcome. The above steps will help take back control and allow the anger to cool.

So, the next time you feel angry and want to react with your anger let’s see how strong you are. If you manage to control it, you’re strong. If you fail then sorry, you’re weak.

Ali رضي الله عنه was not just a man of knowledge and piety but he was also a warrior on the battlefield. But above all, he was a warrior within himself as he was fully submitted to the will, command and desire of Allah Ta’ala.

In the battle of the trenches, he was in single combat with a soldier from the enemy line.

The enemy knew that he had been defeated, and to show a final gesture of insult to Ali رضي الله عنه and the Muslims he spat on Ali’s رضي الله عنه face.

Upon this Ali رضي الله عنه calmly walked away.

The enemy, in a state of confusion, enquired from Ali رضي الله عنه as to why he had walked away.

Ali رضي الله عنه explained that every stride and strike until then was for the pleasure of Allah Ta’ala with the hope of reward in the hereafter Him.

However, when the enemy spat on his face, anger overcame and his motive now became that of anger and revenge.

He explained that if at that point he had killed the enemy then it would’ve been out of personal spite and not for Allah and so he chose to control his anger and walk away.

From this incident, we learn a true lesson of both strength and courage. Even when an enemy was at the mercy of Ali رضي الله عنه he was still strong and brave enough to take control of his anger and walk away. These are amazing examples of amazing people. We need to learn from them so we too can become amazing.