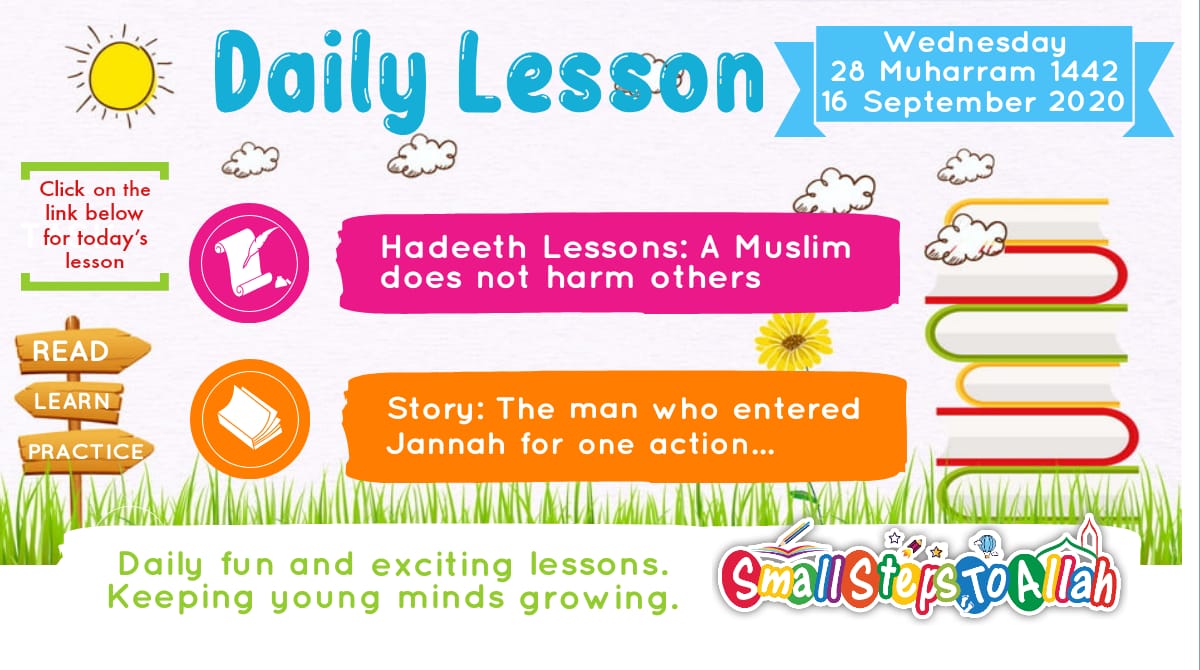 Our Beloved Nabi ﷺ said, “The (perfect) Muslim is he from whose tongue and hand other Muslims are safe.”

In this hadeeth we learn that a true Muslim, will always choose the path of kindness.

A few lessons we learn from this hadeeth are:

2) There are two ways to hurt someone; one is physically and the other is emotionally through words and actions. In this hadeeth both these forms of cruelty have been prohibited; ‘hands’ refers to the physical form which includes punching, kicking, pushing etc. and ‘tongue’ refers to the emotional form which includes speaking ill of someone, being rude, swearing, making fun of someone or even making gestures to someone.

3) Islam is a religion of kindness, not cruelty. The more a person practices Islam, the kinder, more loving and caring he/she will become.

So young children the next time we think of hurting someone by saying something that will upset them, be it calling names, or making fun of each other, or by using physical force such as punching or kicking because we want to look stong, think this is not the way of a Muslim.

The Man who entered Jannah for one action

A long time ago there lived a pious man by the name of Bayazeed Bustaami rahmatullahi alayh (Whenever we speak of pious people after they have passed away, we add rahmatullahi alayh to their name). He was very well known for his knowledge, piety and good qualities. People always saw him as a man of Jannah as he had devoted himself to Allah Ta’aala.

He reached old age and passed away with the Kalimah.

Allah Ta’aala wanted to teach us a lesson of the life hereafter, so after his passing away, someone saw him in a dream. He asked Bayazeed Bustaami rahmatullahi alayh, “How was it after you passed away? How did Allah Ta’aala deal with you?”

Bayazeed Bustaami rahmatullahi alayh replied, “It was very different to what you’d imagine. When I came before Allah Ta’aala, I was asked to show what (good actions) I had brought with me. I thought of all the actions I had carried out throughout my life but none felt worthy enough to be presented before Allah Ta’aala. I was confused about what reply to give. So, with a lot of shame I said, ‘O Allah! I have nothing to show. I have come empty handed and can only hope for Your Mercy and Kindness.”

Allah Ta’aala in reply to this said, “You had carried out many good deeds during your life, but there was one action of yours which I loved very much and I have decided to forgive you and grant you Jannah in return for this one good action.”

What was this good action which was loved by Allah Ta’aala so much?

After mentioning his outcome in the hereafter Bayazeed Bustaami rahmatullahi alayh said to the person who was dreaming, “I have acquired a lot of knowledge and done many good actions to please Allah Ta’aala, but the action that was chosen for me to enter Jannah was that of kindness to Allah Ta’aala’s creation.”

It will need some practice, especially if we are so accustomed to being rude, aggressive and inconsiderate to the feelings of others. But once we pay attention to our actions and the feelings of others it will soon become natural to us and we will Insha’Allah find the hereafter very easy.

So, the next time we want to be rude or want to hurt someone think first whether we are a gaining or losing out and then carry on.